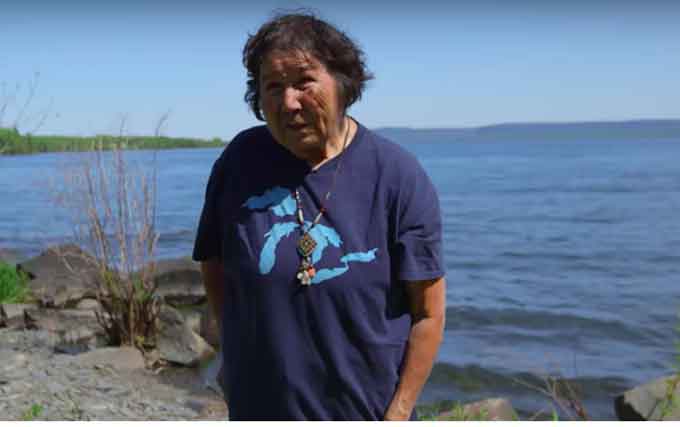 THUNDER BAY – Across Turtle Island, and around Lake Superior, the passing of Josephine Mandamin is being marked today with honour, and with many memories.

The Anishinabek Nation mourns the passing of our Grandmother, our Water Commissioner, our kind and gentle Water Protector, Biidaasige – Josephine Mandamin.

“It is a very sad day. We have lost a great advocate, teacher, and role model. She will be so deeply missed by all and will be fondly remembered for all of what she did to protect the water. Our prayers are with Josephine as she begins her journey home into the Spirit World and back to her ancestors,” expressed Anishinabek Nation Grand Council Chief Glen Hare. “Our thoughts of comfort are with Josephine’s family and community as they prepare for her journey.”

Josephine Mandamin, originally from Wiikwemkoong Unceded Territory, and affectionately called Grandmother Water Walker or Grandmother Josephine, dedicated her life to protecting the water and giving it a voice. She made it her life’s mission to raise consciousness about the fragility of water and emphasize that water is precious, sacred, and one of the basic elements required for all life to exist. Water is life.
“Through all of the years of Josephine’s determination and dedication to raise awareness through her legendary Great Lakes Water Walks, it is my hope that the world hears her message – that water is life!” stated Grand Council Chief Hare. “Our world is a better place because of Josephine’s efforts and those of us who will continue her work to protect our life-giving Nibi, not only to honour her legacy but to ensure water, the world over, is protected. What a remarkable Anishinaabkwe we have had the absolute pleasure of knowing and learning from.”

Grandmother Josephine founded Mother Earth Water Walks – an initiative that brings awareness to the risks and threats to the health and sustainability of our waterways. Through that initiative, she has walked the shorelines of the five Great Lakes as well as in all four directions of Turtle Island – bringing water from all oceans together. She has walked the equivalent of half of the earth’s circumference while building awareness about pollution, laws, fracking, and the selling of water.

As part of her advocacy role, she conducted community ceremonies where she would unite communities with water and empower them to start their own water walks to bring awareness to local lakes and watersheds. Grandmother Josephine has touched the lives of many and inspired a whole new generation of water walkers and warriors.

In her capacity as the Chief Commissioner of the Anishinabek Nation Women’s Water Commission, she was a predominant contributor and leader of the Great Lakes Guardians’ Council, established under the Great Lakes Protection Act. She was also previously on the Committee on the Status of Endangered Wildlife in Canada in 2006.

She was also honoured with an Anishinabek Nation Lifetime Achievement Award in 2012 and the Lieutenant Governor’s Ontario Heritage Award for Excellence in Conservation in 2016 for Excellence in Conservation for Water Walks, and received distinctions and honours from the Assembly of First Nations National Chief Sean Atleo, Native Women’s Association of Canada, Ontario Native Women’s Association and from the Mayor of Duluth Minnesota.