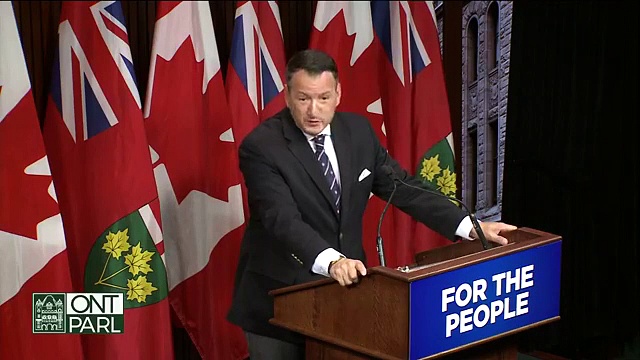 Kenora-Rainy River, Ont. – Ontario police officers and the families in Northwestern Ontario who depend on them will finally be able to count on a fair and transparent police oversight process that will always put public safety first.  “Today, Ontario’s Government for the People will introduce new legislation, the Comprehensive Ontario Police Services Act, 2019. If passed, this legislation will finally fix the previous government’s Bill 175, which treated the police with suspicion while making it increasingly difficult for them to do their jobs,” stated Minister Greg Rickford.

“Every day Ontario’s police servicemen and women come to work with a simple goal: to keep our families safe,” said Kenora-Rainy River MPP, Greg Rickford.  “While we don’t always hear their success celebrated on the news, we take great comfort knowing that our police service works diligently to respond to emergencies and prevent crime. This work entails risk, and it certainly involves difficult decisions. But we rely on the police to keep us safe, and now they can rely on their government to have their back.”

The Act would streamline the SIU investigation process, which would have persisted under the previous Bill 175 and forced many police officers to labour under months- or years-long investigations even in cases where they had no contact with an individual.

“Bill 175 was the most anti-police piece of legislation in Canadian history,” said Sylvia Jones, Minister of Community Safety and Correctional Services. “It was a disaster. It actively undermined policing efforts. And it undermined public confidence and trust in the work police do.”

If passed, the Comprehensive Ontario Police Services Act will enhance police oversight in Ontario by creating one window for public complaints, reducing delays in the investigation process, and ensuring more accountability.

“Over the past three years, the Police Association of Ontario (PAO) has been focused on advocating for the thoughtful modernization of the Police Services Act with both the former and current provincial governments. The PAO has maintained that Ontario’s front-line sworn and civilian police personnel require the appropriate tools and adequate funding to keep our communities safe, and we have remained clear that we support effective oversight, accountability, and transparency to build the public’s trust in our profession. Ontario’s front-line police personnel welcome today’s announcement by the Ontario Government and are hopeful that this new Comprehensive Ontario Police Services Act will serve to restore fairness and respect for professional policing, make oversight more effective, and improve governance, training, and transparency. The PAO is committed to working with the provincial government to ensure Ontario continues to be a safe place to live, work, and visit,” says Bruce Chapman, President, Police Association of Ontario.

“When we were elected one of our first orders of business was to pause implementation of Bill 175 so that we could fix it in a way that continues to ensure oversight – but does so in a way that is balanced, respectful and fair,” said Attorney General Caroline Mulroney.  “Our legislation, if passed, will focus investigative resources where they are needed, on criminal activity, within a police oversight system that will ultimately help build safer communities on a shared foundation of restored trust and accountability.”

By treating police fairly, the Comprehensive Ontario Police Services Act will ensure the police, the government, and the people of Ontario remain partners in creating a more secure province.

“Not every example of police courage and service is as high profile as the response to the North York van attack or the Danforth shooting. What those officers have in common with the everyday heroes who serve and protect us is that they deserve our gratitude and respect – not our suspicion and scorn,” said Jones. “That’s why our government for the people is providing police with the tools, resources and support they need to keep our communities safe, stand up for victims and hold offenders accountable for their crimes.”

WHAT THE POLICING COMMUNITY IS SAYING

“The work OPPA members do every day keeps the people of our province safe. Unfortunately, challenges in the current legislation make it more difficult for the police to do their jobs. The changes proposed by the government today intend to empower police across Ontario to ensure community safety. We look forward to reviewing details of the Bill and participating in the legislative process,” says Rob Jamieson, President and CEO, Ontario Provincial Police Association.

“The Ontario Association of Chiefs of Police has long advocated for significant changes to the Police Services Act in order to assist us in the efficient and effective management of police services that enhance public and officer safety.  We believe there are items in this new legislation that are welcome and look forward to continuing to work with the government and stakeholders, knowing that community safety is our absolute priority,” comments Kimberley Greenwood, President, Ontario Association of Chiefs of Police and Chief, Barrie Police Service.