Home Sports Local Sports How to beat the Polar Vortex? You dive right in!

THUNDER BAY – SPORTS – Far from any polar vortex and a few years back on the London Bridge the first diving competition took place, the year was 1871. A few years later Winnipeg hosted its first Polar Bear Classic invitational diving competition. This polar bear classic is now going on its 51st year and a few select members of the Thunder Bay Diving Club are packing mittens and speedos to attend this annual event.

For two of our local divers Michael and Walker this is not their first trip to Winnipeg but it is there first Polar Bear Classic. Back in June the team went to Winnipeg with a larger contingency of divers and came back with 19 medals in total with Walker and Michael among the medalists. Walker came back with 2 gold and silver while Michael’s only flavour was gold and they are hoping for similar results this time around.

Walker’s weapon of choice for this competition is the tuck dive in various directions. The tuck involves bending at the knees and hips in a compact position, hands-on lower leg, knees and feet together with the toes pointed. The directions of Walker’s tuck dives will be in every dizzying direction from forward, back, reverse, inward and even a 1 1/2 somersault tuck. If that is not enough to tucker someone out, he will also be doing these dives on multiple platforms such as the 1m and 3m springboard and the 3m platform. 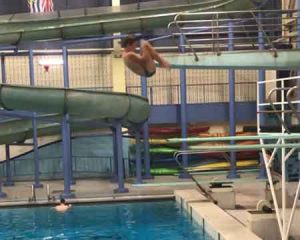 Walker and Michael know and have adapted the Olympic Creed into there preparation this weekend and recognize that the most important thing is not to win but to take part in the competition and with that, we wish them well.

For a few things closer to home the Thunder Bay Diving Club has two events fast approaching the FREE Diving day February 23rd and March break camp both now available for online registration! One of the great things about the March break camps is that you will be alongside most of the dive club members as they too are training during the camps.