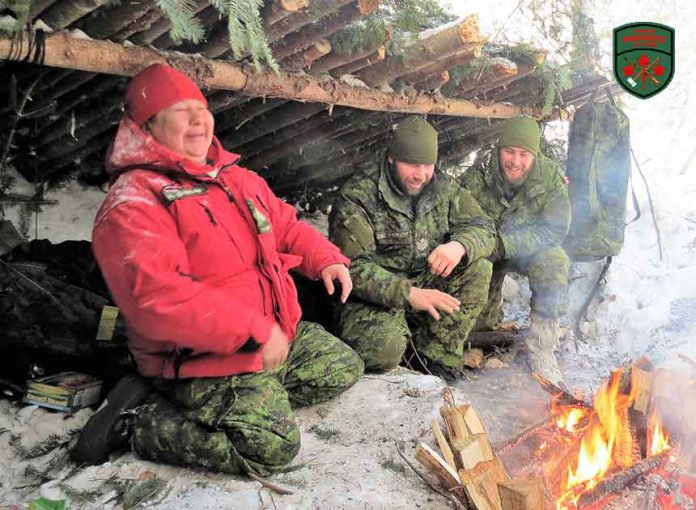 THUNDER BAY – Learning survival skills from four Canadian Rangers from the Far North of Ontario was an outstanding success for a group of soldiers learning how to survive in frigid winter temperatures.

“The Rangers are the experts, so it’s been fantastic to have them with us,” said Sergeant Chris Bard. “It’s been a tremendous learning experience

“We’ve kind of got away from basic survival skills in the military. So it’s nice to put the rifle down and work on basic winter skills, how to light a fire, how to build an emergency shelter and survive the night in it. The experience has been outstanding.”

The five days of training for the soldiers from 2 Combat Engineer Regiment at Garrison Petawawa took place in Killarney Provincial Park, south of Sudbury. In addition to building emergency shelters, the soldiers learned how to ice fish, snare small game, cook in the cold, and how to cope with challenging temperatures. They trained in wind chills that often dropped to as low as -40C.

But a highlight for some soldiers was to find they were sleeping only 35 meters from a hibernating black bear.

“The Rangers are amazing,” Sergeant Bard said. “They look at the woods differently from us. They see things we don’t. They see potentials for emergency shelters, firewood, animals. They saw what looked like condensed breath coming from behind a tree. None of us saw it. They went over to check it out and found it was coming from a hole above a bear den with a sleeping bear inside it. They covered it over and kept us away so as not to disturb the bear.”

The survival training provided by the Rangers was their contribution to a winter warfare exercise for the troops.

“There was an incredibly positive reaction to the Rangers,” said Major Matt Hoard. “They bring so much to the table. Five days was not long enough for all they had to offer. They are really remarkable in what they know and pass on.”

Master Corporal Joe Lazarus was one of the Rangers. He is an experienced hunter from the Cree community of Kashechewan. “Many of the soldiers had to be told how to handle the cold,” he said. “They didn’t know you have to keep moving around when it’s cold. You can’t sit in one place. The most important thing is to care for your feet. Keep moving them. I was surprised so many of the soldiers didn’t know a thing like that. But they learned.”

The Rangers brought goose and moose meat to the exercise to give the troops a chance to eat wild food. “They came to our tents in the evenings and they ate it all,” Master Corporal Lazarus said. “All we have left are (army) rations.”

The other three Rangers were Master Corporals Bradley Anderson from Kasabonika and Yvonne Sutherland from Kashechewan, and Ranger Richard Yellowhead from Nibinamik.