THUNDER BAY – NEWS – Frazil Ice on the Kaministiquia River has restricted the flow of water causing the river levels to rise.

As a result, the Lakehead Region Conservation Authority has issued a Flood Outlook Statement for the lower Kaministiquia River Watershed.

As part of the Authority’s Flood Warning System, staff will continue to monitor conditions over the coming months into the spring and issue Flood Messages as warranted. 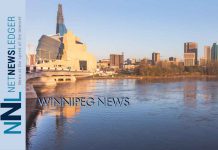 Flood Outlook for Manitoba Increased After Northern US Storms