TORONTO – Ontario’s Government are supporting arts and culture events across the province that will strengthen and grow cultural tourism.

Michael Tibollo, Minister of Tourism, Culture and Sport, made the announcement Wednesday at Roy Thomson Hall in Toronto. This funding will help the Toronto Symphony Orchestra to promote the Star Wars films accompanied by a live orchestra.

“Ontario is home to many events and exhibitions that showcase our province — and I’m proud that our government is supporting them through the Ontario Cultural Attractions Fund,” said Michael Tibollo, Minister of Tourism, Culture and Sport. “This support will help arts and culture organizations drive cultural tourism spending and create new experiences that make the whole province a more attractive place to visit.”

Other projects being funded include:

“The Ontario Cultural Attractions Fund strives to support and increase cultural tourism in Ontario,” said OCAF board chair John McKellar. “We’re proud to be celebrating our 20th year of delivering an investment fund that is able to reinvest another $.70 on every $1 from the government of Ontario. Our support for this major new initiative of the Toronto Symphony Orchestra is a great example of what OCAF can help cultural organizations achieve with creative marketing,” he added.

OCAF helps strengthen tourism, which boosts local economies, creates jobs and draws visitors to communities across the province. This support is part of a $1.28-million investment to support a total of 13 cultural tourism events and attractions in Ontario.

“The TSO’s Star Wars Film Concert Series is unique in Canada and has already attracted a broad audience. Seeing these iconic films accompanied by our talented musicians is the most engaging way to experience John Williams’ legendary orchestral scores,” said Matthew Loden, CEO of the Toronto Symphony Orchestra. “We are grateful to the Ontario Cultural Attractions Fund for helping us increase the promotion of these events and bring them to people from across the province and beyond.”

In 2016, 12.9 million visitors participated in cultural activities in Ontario and spent a total of $7.7 billion on the trips that brought them to the province.

Ontario Cultural Attractions Fund (OCAF) investments are partially repayable loans. This means that repayments replenish the Fund and allow OCAF to invest in even more projects.
OCAF has been investing in cultural tourism for 20 years. Since 1999, events supported by OCAF have attracted over 70 million visitors and generated over $235 million in earned revenues.

Culture is one of Ontario’s fastest growing sectors, employing over 270,000 people and contributing over $25 billion annually to Ontario’s economy.

The Toronto Symphony Orchestra’s Star Wars Film Concert Series includes A New Hope and The Empire Strikes Back this winter. Return of the Jedi and The Force Awakens will be performed as part of the 2019/20 concert season, with full details of the 2019/20 season to be announced by the TSO on January 30, 2019. 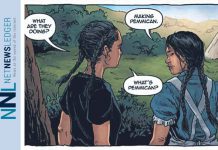 Graphic examples of the art of storytelling