Breaking News!ONTARIO Enacts Emergency Order Prohibiting Gatherings of More Than Five People
Home Sports Local Sports Thunderwolves Men Slam Windsor in Basketball Action
THUNDER BAY – SPORTS – Lakehead’s men’s basketball team defeated the Windsor Lancers on Friday night by a score of 90-57, emphatically putting an end to their losing streak. The win brings Lakehead to 3-10 and lifts them two spots in the OUA West rankings.
“Tonight we showed what being disciplined and executing can do for us,” Thunderwolves head coach Ryan Thomson said. “When we defend and take care of the ball we can compete with anyone.”
Lakehead won every quarter in the game, including a 23-10 margin in the third frame. The Thunderwolves third-quarter dominance was punctuated by Davarius Wright streaking down the court on a fastbreak, Euro-stepping past a defender, and throwing down a two-handed reverse dunk. On the next possession, he crammed home a powerful tomahawk on yet another break. He capped off the run with a butter-smooth three-point shot moments later.
The Thunderwolves unleashed a barrage of scoring, with 11 different players contributing points. Wright led the way with 14 points, and Jared Kreiner chipped in 12 of his own. Alston Harris and Isaiah Traylor added 11 each. Every Lakehead player got on the court, and each one picked up at least 1 rebound.
Lakehead controlled the game from the tip and finished the game ahead in nearly every statistical category. Notably, the Thunderwolves held Windsor to 28.2% shooting, worse than Lakehead shot from downtown alone.
The two squads face off again tomorrow at 8 pm, following the rematch of Lakehead and Windsor’s women’s teams.
“The difficult task is tomorrow,” Thomson said, “bringing the same energy and same level of focus for a full 40 minutes while remaining unselfish and taking good shots.” 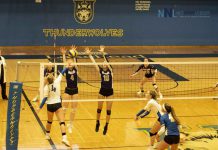 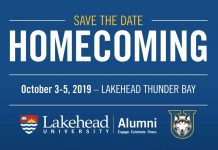