From land reform in South Africa to ancestry websites in the United States, here are five property rights hotspots for 2019

LONDON (Thomson Reuters Foundation) – Battles over land and who owns it are unleashing unprecedented conflict as governments and companies seek access to more of the world’s natural resources, while digital property, like personal data, is an increasingly prized commodity.

With an estimated 70 percent of the world unmapped, more than 5 billion people lack proof of ownership, according to the Lima-based Institute for Liberty and Democracy.

From land reform in South Africa to ancestry websites in the United States, here are five property rights hotspots for 2019:

Proposed policies by Brazil’s right-wing President-elect Jair Bolsonaro, who takes office on Jan. 1, could lead to indigenous people losing lucrative land and cause serious damage to the environment, researchers and campaigners warn.

Bolsonaro has said he will deny new land claims by indigenous tribes and favours opening land to commercial mining and farming. He argues they have a right to charge royalties to improve their quality of life and to integrate with the rest of Brazil, comparing them to animals trapped in a zoo.

Nearly half of India’s population is forecast to live in cities by 2025 as people leave villages to seek better prospects, according to demographers, but many end up in slums with no claim on the land or access to basic services.

A programme by the state housing department in the eastern state of Odisha and charity Tata Trusts is trying to change that by giving land rights to about 1 million slum dwellers.

The initiative aims to distribute titles to 200,000 households after drone surveys and door-to-door interviews helped map the slums and fix property boundaries.

Officials in Mumbai, where about 60 percent of the population lives in informal settlements, are also mapping slums with drones while Maharashtra state is launching a similar exercise for rural land holdings.

More than two decades after the end of apartheid, whites still own most of the land in resource-rich South Africa and ownership remains a highly emotive subject ahead of next year’s national election.

South Africa enshrines security of tenure in its constitution but the government rides roughshod over locals by promoting controversial mining deals, according to Aninka Claassens, director of the University of Cape Town’s Land and Accountability Research Centre.

“Government is … rushing a bill through parliament that would empower traditional leaders to unilaterally sign mining deals without the permission of the people whose land rights are directly affected,” she said in emailed comments.

From mobile devices to satellites, an explosion in digital personal data has created a new type of property as billions of people give away information about themselves.

In the United States, for example, the popularity of consumer genetic services has raised concerns that DNA information could be used for something other than its intended purpose – such as drug or insurance companies using the data to target consumers.

In India, the Supreme Court in September upheld the validity of a controversial biometric identity system, but flagged privacy concerns and reined in a government push to make it mandatory for everything from banking to telecom services.

Britain is experiencing a national housing crisis as homebuilding has declined since the 1970s, driving up property prices faster than wages. The government has set an ambitious target of building 300,000 new homes a year by the mid-2020s.

The lack of affordable housing has fuelled homelessness, with one in 200 people in Britain now homeless – an increase of 4 percent in less than a year despite government pledges to tackle the problem, according to the charity Shelter.

Britain’s housing minister said the government was investing huge sums to tackle the causes of homelessness. 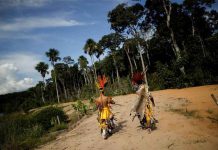 Mixed Reviews for Coke and Pepsi

Biggest Under Reported Story in Canada