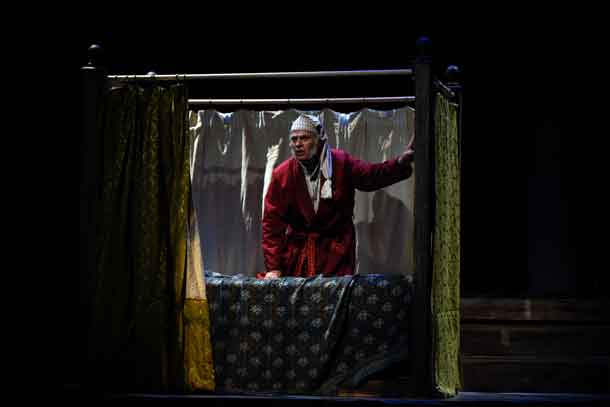 THUNDER BAY – Mario Crudo remembers recently going to visit the old London Academy of Music & Dramatic Art (LAMDA), the school where he had studied.  The prestigious drama school had moved to west London, and the old facility has been converted into an art gallery.  Crudo just wanted to visit his old stomping grounds.

“I knocked on the door… they were closed but I saw someone working inside. She opened the door and informed me that they were not open.” He says. “I told her that I trained here, and to my surprise, she let me in so I can have a look around with no supervision. That would never fly here!”

Travel was not something Crudo did often when he was the Artistic Director of Magnus Theatre. During his long tenure, he oversaw the end of the old Magnus Theatre on McLaughlin Street, the move to the Central School building in Waverley Park and the construction of the “new” Magnus Theatre, all while juggling 23 professional theatre seasons, never-ending fundraising and the day to day operations of Thunder Bay’s only professional theatre.  In his time, the theatre went from crippling debt to becoming debt free.

It’s a time I’m very familiar with. I started at Magnus in 2007, during the height of the efforts to eradicate the enormous debt while trying to produce a great theatre season year after year. In some ways these were challenging times for Magnus. Mario is all too familiar with that feeling.

“The debt was so stressful. I would wake up so many nights thinking about it. Sometimes I couldn’t sleep. I’m not proud of a lot of what we did as a result… being understaffed and overworked. All we could think about some days was how to throw this weight off of our shoulders. We kept chipping away at it, every season, (until) a couple of very generous donations paid down the rest.” The burning of the mortgage in the Magnus Theatre lounge ranks as one of the proudest moments in his career.

In artistic terms, it wasn’t all bad times. Mario did some amazing things, including establishing a tradition of including plays by Indigenous artists at Magnus.

“The Rez Sisters was the first show I directed that was about Indigenous people. Up to that point, I had always brought in an Indigenous director to direct them for me. One day (renowned playwright) Tomson Highway and I were talking and he asked if I had a director for his play yet. I said I was mulling over a couple of options.

‘You should direct it.’ Highway remarked.

‘I don’t think I should,’ I said. ‘It wouldn’t feel right. I don’t know these stories… I don’t know enough about the culture.’

‘How the hell are you going to learn?’ Highway demanded to know.  The playwright trusted me to tell his story.  So I did.” The Rez Sisters remains one of the more memorable and heart-wrenching productions Magnus has ever staged.

Mario Crudo hasn’t actually retired. Anyone that worked with him knew he wouldn’t. He still has stories to tell.  He recently collaborated with Jo-Ann Waytowich on a new script, bringing back her popular Ivanka character.  All the Ivankaplays had their professional premiere at Magnus Theatre.

“It was quite something to be part of a writing team. It came surprisingly easy to me. There were lots of stories from my past that ended up in the script. We booked three readings at the Slovak Legion in the East End, a stone’s throw from where the old theatre once stood. We ended up selling out all three and had to schedule a fourth. I would love to see a full production, hopefully at Magnus, at some point in the future,” he says with a twinkle in his eye.

Mario Crudo is currently back at Magnus, as Ebenezer Scrooge in Charles Dickens’ A Christmas Carol. I ask him if it feels strange to be in front of the audience. He quickly shakes his head.

“You know, I thought it would be weird, but it’s not at all. I’m learning so much – about how I directed. I now have to live what I preached all those years, and it’s not as easy as I used to tell the actors it was.” He laughs. “I know every corner of this building, this theatre. I was worried that it would be strange to be back here, but it has been the opposite. The changes here since I left have been great.”

Mario admits he was worried when Thom Currie, Magnus Theatre’s current Artistic Director, offered him the role. “I haven’t done this in a long time. Could I retain all that information at my age? Would I remember all the lines, all the stage directions? Anyone I have worked with knows consistency is important to me. I’m still nervous before I go on stage… every time.”

Watching him onstage is a treat.  Although he directed more than he acted, Mario Crudo has been at this game a long time.

“I realized pretty early on that I wanted to direct. At one point at The Arts Club in Vancouver, I had plays on all three of their stages at the same time. The first show held over while I directed the second and then those two held over as I directed the third. One of those shows lasted for over a thousand performances.“