Home News Editorial Thunder Bay is at a Crossroads – Where do we go from... 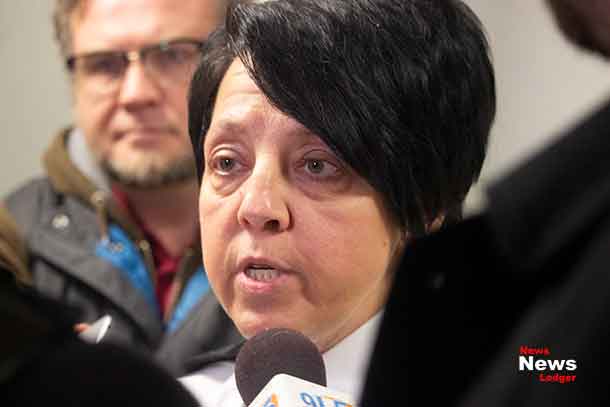 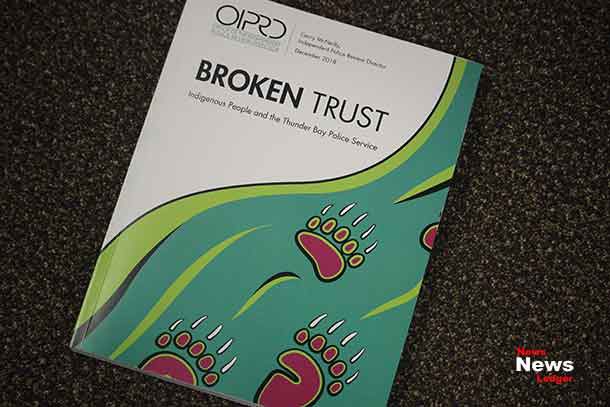 THUNDER BAY – ANALYSIS – The Thunder Bay Police Service is now living under the microscope of the OIPRD. The report, titled “Broken Trust” released on December 10, 2018, sets in place specific timelines for the police service to start implementing the over 40 recommendations. The release of the report brought all of the national media to Thunder Bay to hear what the OIPRD would share.

The OIPRD Report has put Thunder Bay in the national and international spotlight with the highlight that this is a racist police service.

The Broken Trust report released is the first step in a two-step of reports coming down which will place all of Thunder Bay in the international spotlight. On Friday, Senator Murray Sinclair is releasing his report into the Thunder Bay Police Services Board.

For all in Thunder Bay who care about our community, reading the Broken Trust report, while a long read, is likely very key to learning what has gone on, and what needs to change.

Thunder Bay is at a Crossroads

Thunder Bay is at a crossroads. Depending on what direction our community determines will likely decide our city’s future. We can take the easy path of denial and try to ignore and continue to place hate and division on our path, or we can choose to accept the realities in the Broken Trust Report and start working to change our community for the better.

Our region should also be accepting and working to solve some of the other systemic issues that we are facing. We should be working hard to solve the issues of addiction, both to drugs and to alcohol that is a direct result of the Residential Schools and inter-generational Residential Schools eras. The path to healing is a long one, and one of the realities is that too many of the people who end up coming to Thunder Bay already are struggling.

It is an issue first raised by (then) Nishnawbe Aski Nation Grand Chief Stan Beardy. It has been an issue for decades. It remains unresolved and unaddressed.

When Thunder Bay City Council raises the issue of funding at the federal and provincial levels, there is little response seemingly coming here. It is not easy for senior levels of governments to fund things like addiction treatment centres and social safety net supports. However until there are enough resources in place to halt the problems at the source in the home communities, the problems will continue unabated.

Realistically, we are asking Thunder Bay Police to serve not only as law enforcement officers but also as social workers. The job strains are there. It certainly appears over time with what likely started as some of what former Mayor Keith Hobbs told a Lakehead University audience is “black humour” and transformed for some officers into some of the repeated levels of racism and eventually to the abuses and problems between Indigenous people and the Thunder Bay Police.

Until the root problems are admitted to and work starts on solving them, the basic fact is despite everything that the Thunder Bay Police Service does, or for that matter the OPP or the RCMP if they were eventually brought in to replace the city police service, the real issues will remain.

One of the main efforts from not only the City of Thunder, but the Indigenous leadership, and the federal and provincial MPs and MPPs must be moving forward and solving root causes of the problems our city and country are facing.

Many are calling Broken Trust a scathing report. It is harsh. But it is also an opportunity and impetus for real change. Our city simply has a choice before us all, we can accept the critical analysis as valid, and really move forward, or we can maintain a solid death grip on the status quo.

I hope Thunder Bay chooses to move forward. Frankly put, our city has no other choice.

Why? Simply put it is needed, and it is well past time for real action.

The OIPRD Executive Summary says, “On November 3, 2016, I initiated this systemic review to investigate and respond to these concerns. That the questions raised by Indigenous people in 1993 remained as valid as they did some 25 years ago, was deeply troubling, and demanded an urgent and comprehensive response.”

Our community and our police service are on the same path as we were twenty-five years ago.

Think of that for a moment

How many of the lives of Indigenous peoples have been seriously impacted and damaged during the past quarter century? When people get angry over comments coming from First Nations leadership about the way that their people have been treated at the hands of the police, perhaps the solution is to fully read the report.

As some people on social media are questioning the report, or moving to question the findings, it can only be suggested to read the full report. Perhaps too re-read the statement where the Chief of Police acknowledges that there is systemic racism in the Thunder Bay Police Service.

Chief Hauth is a 26-year veteran of the Thunder Bay Police Service, as the new Chief of Police, the task has fallen to her to start making things right. Perhaps what her critics are seeing as a problem could well be an advantage. Chief Hauth perhaps more than any other member of the Thunder Bay Police executive should know where the problems are, and that might help her make the needed changes.

The task before the Chief of Police is a massive one. That task will be made far harder if there is not full community support behind Chief Hauth. It is likely she will also have many people willing to express that the status quo is acceptable.

Thunder Bay as a whole, in my opinion, is a city ready, and wanting change. Moving forward to a more engaging community will make the city take a more rightful place on the national stage.

The OIRPD report adds, “The failure to conduct adequate investigations and the premature conclusions drawn in these cases is, at least in part, attributable to racist attitudes and racial stereotyping. Racial stereotyping involves transforming individual experiences into generalized assumptions about an identifiable group defined by race. We observed this process of generalization based on race in a number of the investigations we reviewed.

“Officers repeatedly relied on generalized notions about how Indigenous people likely came to their deaths and acted, or refrained from acting, based on those biases.

“My finding that investigations were affected by racial discrimination does not represent a determination that all TBPS officers engaged in intentional racism. However, overall I find systemic racism exists in TBPS at an institutional level.”

The repeated message from Thunder Bay’s Police Services Board has been that all is alright, and it is “Business as Usual” at the Thunder Bay Police Service. As the OIPRD was starting its report, the then Police Services Board Vice Chair Brian McKinnon stated, “I know many of these police officers and they work really hard at their job. They are emotionally involved, as well as physically, so I don’t anticipate anything like that coming out.”

The Broken Trust report lays bare the problems and issues which many Indigenous people have had to live with for generations in their interactions with the Thunder Bay Police Service.

While the first statement released by the TBPS appeared to attempt to side-step the systemic racism, Thunder Bay Chief of Police Sylvie Hauth later issued a far more reflective statement, one that likely honestly reflects what the Chief felt.

In her revised statement, the Chief of Police started on the path of following what the OIRPD is telling the Thunder Bay Police Service what they must do. In taking those steps forward, Chief Hauth is showing a great deal of humility and courage.

For many years, effective leadership should have seen the bigger picture and moved to effect change. That appears now possible, not perhaps by choice, but because the problems have finally been exposed for the world to see.

That is quite possibly going to change following the report from Senator Murray Sinclair. It has been reported that in Senator Sinclair’s report he will call for the Thunder Bay Police Services Board to be disbanded for a year and replaced with an independent administrator who will set things right.

The only person on the current Police Services Board who was on the previous board is Cecilia Reitburger who is the new chair and is Indigenous. Likely as that board has just been sworn in, it should be allowed to demonstrate if it is capable of effecting change and following along the path set by the OIPRD report and any recommendations that are included in the report from Senator Sinclair.

The major issue that Gerry McNeilly expresses is causing problems on the Thunder Bay Police Service is racism.

The OIPRD Report says that:

It certainly appears after seeing the initial reaction to the Broken Trust Report, that the Thunder Bay Police Service Executive took some time to reflect.

In her initial response to the report, Thunder Bay Police Chief Sylvie Hauth said, “We acknowledge that there are systemic barriers in policing that must be addressed. This is a very extensive report and we will need time to study and consider all of the specific recommendations. With help from this report, the service continues to work towards bias-free policing.

“In the coming days, we will examine these recommendations. It is our hope that they will be of great value as we continue to build trust with the Indigenous community.”

However a mere three hours after the report was released, Chief Hauth was taking a far different stand.

In their statement, the TBPS say, “This acknowledgement is an important step, as highlighted by the OIPRD report, in the service’s ongoing efforts to build trust with the Indigenous community. The report and its recommendations will be carefully and thoroughly reviewed in the coming days.

“While the report was released today (December 12, 2018), today’s acknowledgement is not the first step the TBPS has taken building trust with the community”.

“I take this report very seriously,” says Chief Sylvie Hauth. “I have been very upfront in terms of my commitment and dedication about where we stand on the reconciliation process. Trust is very important and regaining that trust has been at the forefront of my new role.”

First Nations leadership is suggesting that if all of the recommendations in the OIPRD report are not completed within three years, that the Thunder Bay Police Service should be disbanded.

If the newly appointed Chief of Police can start the road to healing and transforming the Thunder Bay Police Service she may go down as the best Chief of Police the city has ever had. If she can’t she could well be the last Chief of a beleaguered police service.

City Council, the Police Services Board and the people of Thunder Bay all have a role to play in this transformation of our community. So too does Nishnawbe Aski Nation, Grand Council Treaty #3, and Chiefs of Ontario. Additionally, the federal and provincial governments both have a role to play.

If together all of us can effect positive change, together we can make our entire region a better place. That is a goal well worth the efforts.