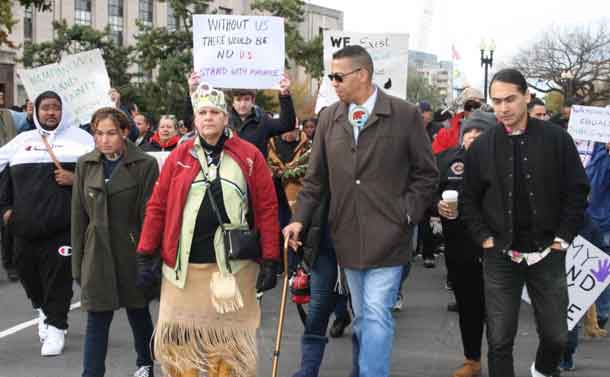 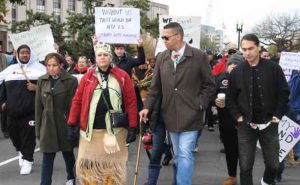 WASHINGTON – (Thomson Reuters Foundation) – The Mashpee Wampanoag hold a special place in U.S. history as the tribe that first met the European settlers known as Pilgrims and participated in the feast now commemorated as Thanksgiving.

Yet it was not until 2015 – four centuries later – that they were allowed to hold 320 acres (129 hectares) of Massachusetts land under a trust administered by the federal government, which only recognized them as a tribe eight years earlier.

Now the tribe’s land holding is under threat and at risk of being lost due to a move this fall by the U.S. government to reverse the tribe’s official recognition, saying the Mashpee Wampanoag was not under federal jurisdiction at a key cut-off point in the 1930s.

“We need our trust land to provide for our people,” the tribe’s council chairman, Cedric Cromwell, told the Thomson Reuters Foundation.

“What is a sovereign without land?”

Other tribes are also facing new difficulties over land. The National Congress of American Indians (NCAI), the oldest and largest tribal umbrella group, said the process of incorporating holdings has slowed under U.S. President Donald Trump.

It fears that proposed regulatory reforms to the land process – which observers said would likely be completed soon – could further complicate and further slow a process that tribes say is already too bureaucratic.

Most Native American land is held in trust for tribes by the government, but it can take years or even decades to add to those holdings – an issue that many see as a key driver of poverty on reservations and an ongoing injustice.

Derrick Beetso, NCAI general counsel, said there is growing concern that the Trump administration is “starting to establish a pattern” seeking to “limit or diminish” the amount of tribal land held by federal trust.

Strengthening landholdings was a priority under the Barack Obama administration, but the Trump administration had “started off slow” in approving new trust applications, Beetso said, many of which were holdovers from the previous government.

“What tribes want is a priority from this administration that says taking land into trust is important and they support self-government – but this is yet to come,” Beetso told the Thomson Reuters Foundation.

Laws enacted a century ago saw the loss of two-thirds of land on Native American reservations, according to the NCAI – some 90 million acres (36 million hectares), including some of the best parcels. About 8 percent has since been reacquired.

Concerns were heightened a year ago when the Department of the Interior (DOI) – which manages public and tribal land – proposed changes to the way the federal government takes lands into trust.

Those would include reversing streamlined measures put in place under the previous administration, giving increased voice to local authorities in land acquisitions and handing the federal government new powers to veto such transactions.

A letter sent to tribal authorities in October 2017 explained the proposed changes as an effort to reduce the financial burden placed on tribes by the acquisition process.

Although that proposal was later withdrawn, and the DOI began a separate, broader approach, tribes regard the letter as a “sneak-peek” of government intentions, said Beetso.

The NCAI “strongly opposes” the changes outlined in that letter and warned of “a devastating impact on the majority of Indian tribes” should its proposals be adopted.

DOI spokeswoman Nedra Darling said officials were reviewing public comments and seeking input, “looking for ways to improve our regulatory processes”. She did not respond to questions about concerns raised over the proposal.

Under the complicated system that governs tribal lands, federally recognized tribes are considered sovereign nations: they elect governments and operate under their own constitutions.

Yet for the most part, they do not own their land. The vast majority under tribal jurisdiction – about 56 million acres – is held in trust. So when a tribe wants to add to its land holdings, it needs to convince the government to do so.

That sets up a bureaucratic process, yet adding land is critical for economic development and to address a growing housing shortage, said Cris Stainbrook, president of the Indian Land Tenure Foundation, a community-based organization.

“Having a limited land base is really a major constraint, and it’s a sure-fire way of keeping people in poverty,” he said.

Matthew Fletcher, director of the Indigenous Law & Policy Center at Michigan State University, said a tribe looking to develop infrastructure such as housing might have the funds “but it has to get the land into trust first”.

Slowing down that process, as under last year’s proposal, would mean “tribes won’t be able to develop their government, provide services to members — all of those things that require that tribes acquire land,” he said.

The Trump administration has gone further in Alaska: in June it halted all tribal land acquisitions pending a review.

For historical reasons Alaska’s 229 recognized tribes – more than any other state – operate under special regulations. It was only in 2015, after years of litigation, that the federal government began to take Native American lands there into trust.

Kendall-Miller said tribes’ motivations for adding land varied. For at least two, alcoholism had become a major concern, and this offered an opportunity to access federal assistance in regulating alcohol, she said.

Consultations on the Alaska proposal are ongoing, and a public comment period closes in December.

The Mashpee Wampanoag and supporters marched in Washington, D.C. on November 14 – a week before Thanksgiving – to urge Congress to pass a law that would safeguard their land.

Should they lose their trust lands, it would be the first such instance in decades, said Cromwell.

“If neither Congress nor the federal courts weigh in to stop this, this administration will return the Mashpee Wampanoag once again to landlessness, force us to close our schools and social service programmes, and lead us back to despair,” he said.