THUNDER BAY – POLITICS – Thunder Bay’s new city council has been sworn in. Mayor Bill Mauro has delivered his first remarks as Mayor of the city.

The new council has and will face challenges over the next four years.

An incident over the weekend, a Thunder Bay Police Service officer who allegedly struck an Indigenous teenager has garnered the kind of national exposure that the City of Thunder Bay does not need. As the Police Service and Police Services Board both are waiting on the release of reports on systemic racism, Mayor Mauro is poised to take a seat on that board.

The new Mayor says that taxation, crime, the economy and infrastructure are going to be major areas of focus for this council.

Mayor Mauro says that the problems of racism are not unique to Thunder Bay.

Let me begin by offering my thanks on behalf of City Council to: Mr. Sal Picollo and the MacGillvary Pipe Band, Commander Kim Treichler and The Branch 5 Legion Colour Party, Elder Beatrice Twance Hynes for the Smudge Ceremony, Ms. Rita Fenton, Fort William First Nation for the drum and song performance, Pastor Nancy Ringham for the Invocation and Laura Daniele for the singing of O Canada.

Welcome. To the representatives of our M. P. offices (Sharla Knapton for Don Rusnak), our MPP offices (Larry Joy for Michael Gravelle), past Mayor Jack Masters, to our Administration and Executive Management Team, our Municipal partners/Union Representatives and leaders, our outside Board representatives, Councillor Michelle Solomon, on behalf of Chief Peter Collins of Fort William First Nation, to the family members and guests of our municipally elected representatives, and to the members of the Elders Advisory Council.

I would also like to recognize that the City of Thunder Bay was built on the traditional territory of the Ojibway people of Fort William First Nation-signatory to the Robinson Superior Treaty of 1850, and is also a historic Metis settlement.

Let me also thank and offer my appreciation for the past service of those not returning: Keith Hobbs, Paul Pugh, Linda Rydholm, Joe Virdiramo, Iain Angus, Larry Hebert and Frank Pullia. And, to all of those that put their name on the ballot in the last municipal election.

As I began to reflect on and prepare these remarks, I thought of my first meeting here some 21 years ago, as a Councilor representing Northwood Ward in 1997.

I said to myself as I was driving to City Hall for my very first meeting, Billy don’t screw this up (Pardon the colloquialism). Remember who you are representing. The constituents that elected you! Your friends that supported you! The City, and most importantly, your Family! I now find myself back here again, and over the next four years I will remain unequivocal in my support for our City, my home for almost all of my 62 years, a great place to live, and an incredible place to raise a family. I can only promise you one thing. My best effort! I know you expect nothing less.

So here we find ourselves, 13 of us brought together by the electorate to act on their behalf. Tonight, they are all in our thoughts. By working together, we can live up to their expectations.

Through the campaign, we all heard most of the same concerns expressed to us from our voters. Taxation, crime, economy and Infrastructure were consistently put forward as the priorities of the electorate. They realize how fortunate we are to live where we do, surrounded by boundless, natural beauty. They all just want to feel safe. They all just want to feel part of something.

It is now our job to focus, as best we are able, on these issues and advance on them over the next four years.

You have chosen to serve at a difficult time. Social media enables a level of incivility and personal virtual assault never seen before. It can challenge even the most community minded and committed, to continue with this work.

It is in these moments that we must all remember why we put our names on the ballot. To serve the citizens of Thunder Bay as best we are able. Political decisions can appear to be messy and convoluted to the electorate. It’s not easy work.

But if we can show clarity to the people of Thunder Bay! If we can show commitment and consistency and conviction as we engage in community building. As we stand up for our city and its reputation. As we work to build upon a city that people are still proud to live in and move to, then maybe after four years or sooner, we will have earned the respect of the silent majority.

So I thank you for putting your name forward to serve and I thank your friends and family for supporting you in your decision. Our work can be complex with many competing priorities. Sometimes collectively, we will need to step back, and look at our work from the 30,000 foot level. It can sometimes help to make our decisions seem simpler and clearer. Because sometimes in this chamber there can be a lot of heat, but not a lot of light.

At the end of the day the people of Thunder Bay give us their money and we decide as a group how to spend it. It is a very serious responsibility. As we deal with complex and competing priorities this fact can never be separated from our decision making!

We must prioritize, we must commit, we must have the conviction to say no, while remaining empathetic and understanding to the unending list of legitimate, substantive requests placed before us. We cannot and should not try to please everyone, any effort in that regard could lead us to pleasing no one. People want results. While we have 4 years together I believe that to a large degree it is the next 4 months that may define who we are as a group. Budget is just around the corner and it represents our first major test. The electorate will be watching.

The next 120 days will send a signal to the community about what the next 4 years will look like. We must be community builders.That means deciding. Why don’t we have an indoor turf facility in 2018? That means narrowing our focus. Are we still pursuing an event center/new hockey rink or have we moved on from that for now? We must set our priorities and convey clearly to our constituents what they are, understanding that we cannot always say yes and that saying no is necessary although more difficult.

People want hope/not false hope- not a long list of promises and not Pollyannaish rhetoric- but hope that is achieved through our collective focus, commitment and conviction. We cannot be all things to all people. There is a silent majority that is looking to their elected leaders to speak our truth and make the tough decisions.

Our fiscal capacity is not limitless although some might feel otherwise. We must always remember who pays for our “YES”. Many in our community already feel overburdened. We always need to remember the individual homeowners and businesses that pay for our decisions

We are thirteen. It is a large number and it can make arriving at a decision difficult and exhausting and frustrating. It has been said that “a camel is a horse designed by a committee”. That camel may have been the result of a compromise, too many opposing and conflicting opinions may sometimes lead to what we think is accommodation and compromise but it may also just lead to poor choices.

Once our priorities are set we must identify where and how we will pay for those priorities with as minimal an impact on our tax base as possible, and begin moving forward.

Four years will go by in the blink of an eye.

One of my heroes, Martin Luther King Jr. said:

There comes a time when one must take a position that is neither safe nor politic nor popular but one must take it because ones conscience tells one it is right”.

Tonight you have been sworn in and as we say in this business tomorrow you get sworn at. I again thank you for your commitment to serve and I look forward to working with you on behalf of the people of Thunder Bay for the next four years. 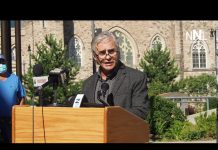