QUEEN’S PARK — During question period on Thursday, Sol Mamakwa, NDP MPP for Kiiwetinoong, told the Ford government to begin working with First Nations communities and invest in northern airports that fly-in communities depend on. “These airports are essential lifelines for the communities they serve,” said Mamakwa, the NDP critic for Indigenous Relations and Reconciliation.  “But Ontario’s northern airport investments have not kept up with the need”.

“Because of that, there are people who are not receiving urgent medical attention because planes and helicopters were unable to land. Millions of dollars of groceries and medicines have spoiled because they could not be delivered.

“Has this government begun to engage with fly-in First Nations communities in the Far North to begin discussion on essential improvements to these airports?”

Minister Yurek stated in response, “We need to improve transportation within the north, especially with our Indigenous populations and we have an understanding of that to connect communities, to see they have opportunity to receive supplies, to receive medical help, to move to and fro out of the area. And we understand that, and the Ministry of Transportation is working with the Minister of energy, northern development and mines to address these issues. Has the ministry started that engagement. I’ve been on the job for 15 days. I’m still getting the briefings and I’ll find out for you what they’re doing. If they haven’t, I’ll get them to get working on it. I’ll give you that much.”

The major airports for Northwestern Ontario are Thunder Bay International Airport, Sioux Lookout Airport, and Pickle Lake Airport. Pickle Lake is the nominal freight shipment base as it is one of the furthest north airports that transport trucks can drive too.

Mamakwa said Northern Ontario airports serving remote populations are among the fastest growing in the province and serve a critical role for the safety and well-being of the people in far north First Nations communities.

“There have been needless deaths and unnecessary suffering due to a lack of landing approach infrastructure at these remote airports,” said Mamakwa.

Minister Greg Rickford responding to the supplementary question stated, “Thank you, Mr. Speaker. I appreciate the opportunity to respond to this question. Of course what I think about and the member for Kiiwetinoong and I were just youngsters, but there was a great Progressive Conservative member. He was called the emperor of the north. And he is, in fact, the guy who started to build those develop airports and runways in all of those isolated communities. That’s very well documented. We continue,

“Mr. Speaker, to remain committed to the opportunity of opening up our northern communities, to ensure that we have the social, health and economic benefits that are afforded to those isolated communities by building corridors to pros period of time. Electrification and road access is just as essential as any other form of transportation infrastructure. We’re going to be talking big that in the next couple of months. There’s going to be a budget to support that. We just hope the member will stand with us and vote to support better transportation in northern Ontario.” 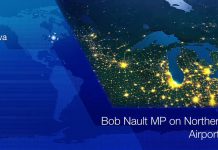