ANISHINABEK NATION HEAD OFFICE — Anishinabek Nation Grand Council Chief Glen Hare is concerned with the Supreme Court decision that federal lawmakers do not have a duty to consult with Indigenous people before introducing legislation that might affect constitutionally protected Aboriginal and treaty rights.

“Yesterday’s ruling from Canada’s highest court was very disappointing for the Anishinabek Nation. As Anishinabe, we expect the honour of the Crown to be the premise of our treaty relationship,” expresses Grand Council Chief Hare. “However, based on yesterday’s ruling, it appears that Canada has set a precedence and is now positioned with the support it requires from its courts system to not be held accountable when they avoid having any real meaningful dialogue with Anishinabe on decisions that may encroach on treaty rights and ultimately affect us. There is nothing honourable in this approach.”

The federal lawmakers argued that such an obligation would slow down the legislative process.

In its 7-2 decision, the top court has ruled against the Mikisew Cree First Nation in Alberta, which had argued that two omnibus budget bills introduced by the former Conservative federal government in 2012 affected its constitutionally protected treaty rights because they amended regulatory protections for waterways and the environment.

Interim Lake Huron Regional Deputy Chief Scott McLeod also believes that this self-imposed authority by Canada’s lawmakers to forego consultations with Indigenous peoples before introducing legislation sets a precedent that can have impacts on First Nations.

“If this decision was apparently required to set out principals for the necessity of ‘parliamentary supremacy’ in its capacity of drafting legislation and should not be interfered by a duty to consult, who gave them this supremacy? Themselves? Indigenous Nations never gave, sold, transferred or signed away this supreme authority over us—it was blatantly assumed,” says Chief McLeod. “They have already admitted the recognition of our Nationhood and need to deal with us on a ‘Nation-to-Nation’ relationship. We signed Treaties Nation-to-Nation, therefore, we need to develop legislation Nation-to-Nation.”

Those amendments reduced government oversight of lands and waters and thus threatened its established right to hunt, trap and fish on their traditional territory. These rights were guaranteed by the Crown when it signed Treaty 8 in 1899, and were enshrined as constitutional rights after the passage of the Constitution Act of 1982.

The Mikisew Cree argued the Government of Canada should have consulted them before it drafted the legislation and before it was tabled in Parliament. 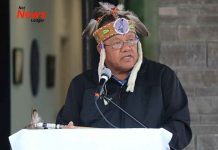