Assault Happened Outside the Library

THUNDER BAY – Assistance from the public is being requested to help identify a male responsible for an assault on June 27, 2018 outside the Waverly Resource Library on Red River Road.

The Thunder Bay Police Service responded to an assault in progress that sent a 52-year-old male to the hospital for medical attention. When officers arrived, the suspect had already fled on a bicycle. The follow-up investigation involved speaking to witnesses and obtaining surveillance video that helped to secure an image of the suspect in this incident.

The suspect is described as a 25-to-30-year-old Caucasian male who is 5’7″ tall with a medium build. He has brown hair and a mustache and goatee. 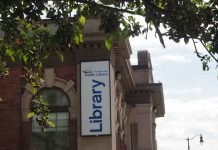