KENORA – Bob Nault, Member of Parliament (Kenora riding), on behalf of the Honourable Jonathan Wilkinson, Minister of Fisheries, Ocean and the Canadian Coast Guard, today announced $4 million in funding over four years for the IISD-Experimental Lakes Area. Nault was joined in Kenora by David Lametti, Member of Parliament for LaSalle—Émard—Verdun, and Parliamentary Secretary to the Minister of Innovation, Science and Economic Development.

“The IISD-Experimental Lakes Area is a great source of pride for Northerners, and we are extremely lucky to have this world-renowned facility in our own backyard, here in the Kenora riding,” stated Nault. “It was an honour for me back in 2016 to announce the restoration of the facility’s funding, and I am incredibly proud to see the federal government will continue to support the ELA for years to come.”

The International Institute for Sustainable Development – Experimental Lakes Area (IISD-ELA), located in the Kenora riding,  is a unique research facility where scientists can undertake real-world experiments on small lakes to improve our understanding of human impacts on the environment.

This most recent funding supports the Long-Term Ecological Research program, which monitors a range of indicators that help to identify long-term trends and ecological changes of fisheries health and productivity in Canadian boreal lakes. The open dataset produced by this research is available to the public, academia, researchers and the government to better understand how human and environmental stressors affect our freshwater ecosystems and to promote science-based management of Canada’s freshwater resources and ecosystems.

“Today’s announcement shows our government’s commitment to the research done at the facility and puts an emphasis on turning this research into science-based policies which will help protect our freshwater resources,” concluded Nault.

“This is the fiftieth year of IISD Experimental Lakes Area—Canada’s incredible gift to the world’s freshwater research. Now that we have an unparalleled half-a-century of data on a wide range of indicators of freshwater health, we are dedicated to sharing that data openly, to ensure it makes the greatest possible impact,” stated Matthew McCandless, Executive Director, IISD Experimental Lakes Area. 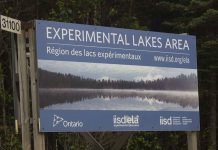