ATTAWAPISKAT – A Canadian Ranger and a 13-year-old Junior Canadian Ranger helped the Royal Canadian Air Force airlift an injured snowmobiler in April from a remote hunting camp near Attawapiskat in Northern Ontario.

The snowmobiler, a young woman from the isolated Cree community of Attawapiskat on the James Bay coast, was in a small family party that was hunting geese when she was knocked unconscious after being thrown from her snowmobile.

A member of the party used a satellite phone to seek help for her. The call went to the emergency services dispatch centre in Timmins. It was passed on through the Nishnawbe-Aski Police to the Ontario Provincial Police, who called on the Canadian Armed Forces for assistance.

Ranger Gilbert Spence of the Attawapiskat Canadian Ranger patrol left the community at about 2 a.m. along with a relative of the injured woman. They snowmobiled along the frozen shore of James Bay until they reached a hunting camp where the woman, who had regained consciousness, was awaiting evacuation for medical treatment.

An RCAF Hercules search aircraft from Canadian Forces Base Trenton, with two search and rescue technicians on board, arrived over the camp at about 4 a.m. The emergency centre in Timmins relayed messages between the aircraft and Ranger Spence, who was using a satellite phone.

“The plane circled overhead for about 30 minutes and dropped flares to illuminate the ground,” Ranger Spence said. “They were so bright it was just like daylight for a good 10 minutes.”

At the request of the pilots, he lined up several snowmobiles with their headlights on to direct the technicians during their descents by parachute. “It was amazing,” Ranger Spence said. “They landed right in front of the camp.”

He and Junior Canadian Ranger Eddie Fireman, who was at the hunting camp, helped the technicians collect their emergency gear and assisted them as they dealt with the injured woman.

An RCAF rescue helicopter arrived from Trenton at about 8 a.m. and flew the woman to Moosonee where she was transferred to the RCAF Hercules and flown to Sudbury for medical treatment.

The extent of the military response to assist a single injured person in a remote location impressed Ranger Gibson. It involved the Rangers, a Junior Ranger volunteer, and highly trained members of the RCAF and two aircraft.

“It made me pretty proud to be a Ranger, wearing my uniform and being part of all that was being done by the military to help one person,” Ranger  Spence said. “Young Eddie happened to be wearing his (Junior Ranger) cap and hoodie while he helped in any way he could. It was a good feeling.”

“Parachuting to emergencies is something we train for regularly,” said Master Corporal Brent Nolasco, one of the rescue technicians. “There were no obstacles, and soft snow on the ground, so we arrived quickly once we landed. We stabilized the patient in (the) hunting camp and the Rangers and the snowmobiler’s family kept a fire going to keep everyone warm.” 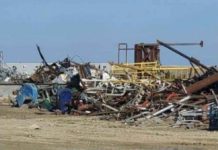