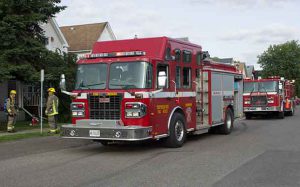 THUNDER BAY – NEWS – On April 10th at 6:30 pm, Thunder Bay Fire Rescue Service responded to a structural fire on Shuniah Avenue. The call was received from an off-duty firefighter, who was passing by.

The first arriving unit noticed dark smoke stained basement windows, and a second alarm was initiated, bring a total of 5 Pumpers, an Aerial ladder, and a Command Unit.

There was heavy fire damage to the basement of this residence and smoke damage to the upper floors. There were no injuries to report to firefighters or the owner and his dog, who got out safely. The fire was determined to be caused by batteries being charged in the basement. 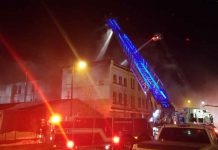