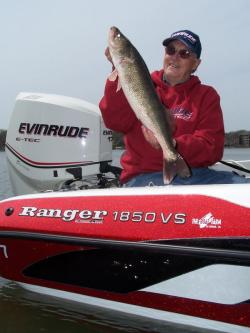 When anglers hit the water on Mille Lacs for the fishing opener on Saturday, May 12, catch-and-release only regulations will again be in effect. The lake’s spawning walleye population has improved from last year, so no mid-season closures are planned.

Similar to prior years, night closure for the 2018 walleye fishing season will be in effect on Mille Lacs from 10 p.m. to 6 a.m. beginning Monday, May 14. The night walleye closure remains in effect throughout the entire open-water season, which ends Nov. 30.

The catch-and-release summer season and night walleye closure are part of the DNR’s continued strategic efforts to understand and improve the walleye population in Lake Mille Lacs.

The population has undergone a decline over the past two decades that has coincided with significant aquatic system changes including increased water clarity and decreased walleye productivity; the introduction of zebra mussels, Eurasian watermilfoil and spiny water fleas; a changing zooplankton community that may be altering the aquatic food web; and declines in certain forage species, including tullibee.

“Improving the walleye population on Mille Lacs is a top priority for the DNR,” said Tom Landwehr, DNR commissioner. “We want to see as much walleye fishing on Mille Lacs as possible this year. Anglers have had a very good winter walleye season on the lake and we will be able to continue that trend into the open-water season with no mid-season closure planned.”

DNR Fisheries Chief Don Pereira said DNR analyses as well as external review indicate that the walleye spawning stock has increased significantly in Mille Lacs and the lake can support a larger safe harvest level of walleye in 2018, as long as a catch-and-release rule is in place.

“Implementing a catch-and-release policy this season is important not only for the sustainable growth of Mille Lacs’ walleye population, but for area anglers, businesses, and Mille Lacs area communities,” Pereira said. “We want anglers to get out and enjoy the abundant fishing opportunities on Mille Lacs.”

State and tribal allocations
The state of Minnesota and Chippewa bands that cooperatively manage Lake Mille Lacs have yet to set the safe harvest level for 2018 and discussions are ongoing. These discussions follow the process outlined in protocols and stipulations arising from the U.S. Supreme Court decision in 1999 to uphold the bands’ treaty rights.

Seeking new solutions to improve and sustain a healthy walleye fishery
In June 2017, the DNR announced that a new external review team of scientists would take a fresh look at Lake Mille Lacs walleye fishery. Led by walleye expert Dr. Chris Vandergoot of the U.S. Geological Survey, this review showed that the DNR’s survey methods met or exceeded accepted best practices, and that interpretations of changes in the lake are correct. A summary of the team’s conclusions and recommendations will be available later this year. DNR staff are currently exploring the feasibility of implementing some of these recommendations.

Bass, northern, and muskellunge regulations
In addition to walleye, the DNR encourages all Minnesotans to visit Lake Mille Lacs to fish the other abundant species that the lake has to offer. The lake is nationally recognized as one of the nation’s top smallmouth bass and muskellunge fisheries. In 2017, Mille Lacs was named the number one bass fishing lake in the nation by Bassmaster Magazine. The lake hosted the Toyota Bassmaster Angler of the Year Championship in 2016 and 2017.

Bass season opens Saturday, May 12, but is catch-and-release only through Friday, May 25. Beginning on Saturday, May 26, Mille Lacs’ bag limit will be four bass per angler. All smallmouth and largemouth bass between 17 and 21 inches must be immediately released. Anglers may keep only one bass over 21 inches.

Lake Mille Lacs has special regulations that exempt it from the new statewide northern pike zone regulations. The northern pike season opens May 12 and anglers may keep up to five fish. All pike between 30 and 40 inches must be immediately released. Only one northern over 40 inches may be included in the bag limit of five.

For muskellunge, the season opens on Saturday, June 2, with the statewide rules of a one fish bag and a minimum length of 54 inches.

Beginning June 2, anglers may fish for muskellunge and northern pike at night, but may only possess and use artificial lures or sucker minnows longer than 8 inches. Bowfishing for rough fish also is allowed at night but possession of angling equipment is not allowed and only rough fish may be in possession.

Too Many Walleye Generates $1200 Fine

$13,050 Fine and Licence Suspension for Over-limit of Walleye