THUNDER BAY – Ontario Regional Chief Isadore Day in a statement issued today says, “Today’s visit by the Prime Minister to Pikangikum First Nation is the fulfillment of a commitment he made shortly after the 2015 election, following a series of suicides by young people. In some respects, Pikangikum is ground zero in terms of poor health determinants – a lack of housing, clean water, and reliable electricity. In fact, Minister Carolyn Bennett stated at last July’s AFN Annual General Assembly that any new housing for Pikangikum would not happen until the community is connected to a power grid.”

“The good news is that Wataynikaneyap Power is developing the 117-kilometer Pikangikum Distribution Line Project to connect to the nearest provincial hydro grid at Red Lake. The anticipated completion in November of this year. Until then, Pikangikum will continue to experience power outages when the diesel system breaks down. This energy crisis exacerbates the current deplorable and overcrowded living conditions.”

“On March 29, 2016, nine people died in a tragic house fire — six adults and three children. Pikangikum Chief Dean Owen stated that efforts to put out the fire were complicated by the muddy roads and lack of running water in most of the community. These tragedies are far too frequent in First Nation communities across the country. In fact, First Nation people are 10 times more likely to die in house fires than mainstream Canadians.

“Ironically, earlier this month, Prime Minister Trudeau released a statement marking the 20th anniversary of the Great Ice Storm that hit parts of eastern Canada. The statement said in part: “Without electricity, heat, food, and water, people were forced out of their homes and businesses could not stay open. The freezing rain made all forms of transportation treacherous. Impassable roads hindered basic services and made it difficult for emergency vehicles to help those most in need. Thirty-five Canadians died as a result of the storm.”

“I would like to remind the Prime Minister that Pikangikum, and so many more First Nation communities, deal with adversity on a daily basis. Today’s visit should reinforce the Prime Minister’s commitment to improve the socio-economic conditions of our Peoples. True reconciliation will not be achieved through apologies and funding lines in a budget to be released in 2020. For the sake of our children, we need action now.”

Among the activities the Prime Minister participated in:

“We are honoured that Pikangikum is the first NAN community the Prime Minister has visited, and we are pleased to welcome him and all of our guests to our growing community,” said Pikangikum First Nation Chief Dean Owen. “We are eager to show the Prime Minister our beautiful new school full of youth who are eager to learn and look forward to him hearing directly from our young leaders. By making time to visit us, the Prime Minister is sending a powerful message to our young people that I hope will inspire them to follow their dreams and reach their full potential.” 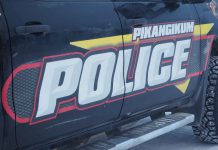