THUNDER BAY – Quitting smoking is one of the most common New Year’s resolutions. It is a great goal. Being cigarette free is good for your physical health as well as for your financial health. It is also a great way to set a positive example.

However, quitting smoking is also one of the hardest things for many people to actually achieve. For many people, getting past the resolution stage to the goal is really hard. The willpower, support of family and friends, the breaking of often long-standing patterns of smoking are really hard.

Having that goal will make a difference, but getting to success is going to take a lot of work.

A study, from the United Kingdom’s Royal Society of Public Health, found that that “quitting smoking is the most difficult resolution to keep.” Only four percent of those who attempt to quit smoking unaided remain smoke-free one year later. Another study, from the University of Scranton, found that only eight percent of people who make resolutions meet their goal. This is known as “false hope syndrome.”

Despite the difficulty, deciding to stop smoking is one of the most common, potentially beneficial and consistently challenging resolutions. Smoking reminders, also known as “cues,” are abundant in society, said Andrea King, Ph.D., professor of psychiatry and co-leader of the University of Chicago Medicine Comprehensive Cancer Center’s Cancer Prevention and Control program.

Those cues also include spotting someone smoking or seeing ashtrays, lighters and cigarette advertisements. These psychological factors, coupled with the biological side effects that come with nicotine withdrawal, make it particularly challenging for many to resist the urge and stay smoke-free.

The first week can be the hardest, King said, with frequent and intense cravings. An estimated one-third of smoking-cessation efforts fail right away, in less than seven days.

Yet it is hard to imagine a more compelling motivation. According to the World Health Organization, tobacco is responsible for an estimated 6 million deaths worldwide each year. Another 890,000 deaths result from non-smokers being exposed to second-hand smoke.

Tobacco use kills more Americans than alcohol, car accidents, HIV, guns and illegal drugs combined. Tobacco smoke contains more than 7,000 chemicals, according to the U.S. Centers for Disease Control and Prevention. Hundreds of these chemicals are harmful. About 70 can cause cancer.

That should be ample incentive. For most people, however, the New Year’s resolution process itself is flawed. They rush into a significant commitment, often with a hangover but without a plan. The crucial first step often bypassed, is to design a specific plan for each person, a written document that is personal, targeted, realistic and sustainable.

“Evidence-based smoking-cessation methods can help people quit smoking,” said King. “However, it isn’t easy. Most smokers can increase their odds of success by using evidence-based methods and seeking professional help.”

Resolutions flop for many reasons. They often fail because they are not “focused, specific or organized,” said King. They need to be achievable and measurable on a day-to-day basis.

The goal is clear, but the process is murky. King recommends those who are preparing to quit should:

“Seek help as needed,” King suggests. “The smoker’s brain gets used to nicotine. Without it, people go through withdrawal. The severity of the symptoms varies widely across people.”

Ask your doctor about specific tools that could help, such as nicotine-replacement therapy, classes designed to help you stop smoking, counseling and medication. Avoid substances such as alcohol that tend to weaken commitment. Meanwhile, try replacing tobacco with healthier oral stimulation like gum. When you feel the urge to smoke, brush your teeth instead, King said. (This will please your dentist.)

Exercise can also provide a huge boost and help prevent weight gain that can happen when smokers eat when they feel the urge to light up. Instead, go for long walks. Try to work in running, biking or swimming as your pre-smoking stamina gradually comes back. Exercising with friends is even better. Don’t get discouraged if this fails. Think about what went wrong and try again, she said.

Reward yourself for progress along the way. Tobacco is expensive. Consider using part of your savings on something fun. And enjoy the gradual return of certain health benefits. Carbon-monoxide levels in your blood will go down within days. The risk of a heart attack declines within a month. The odds of lung and oral cancers should steadily decrease over the next ten years to near normal levels.

Also consider advice from the Nobel Prize-winning Irish playwright, Samuel Beckett. As he put it – in a different context – “Ever tried. Ever failed. No matter. Try again. Fail again. Fail better.”

Thunder Bay Man Faces Up to $1.1 Million in Fines 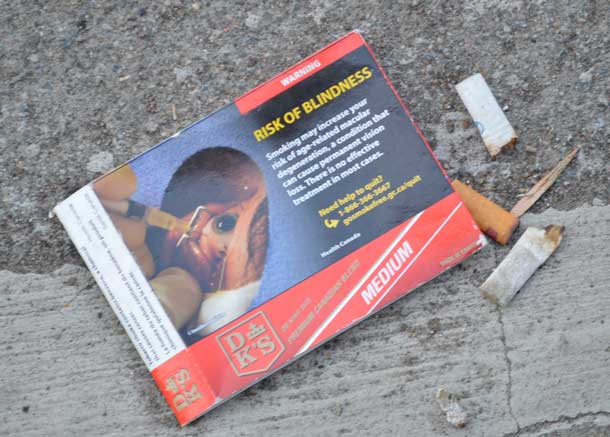 Tobacco Use Among Indigenous Teens Continues to Climb