“Everyone in London thinks about homelessness. It’s something you see pretty much every day and it feels like it’s getting worse”

LONDON, (Thomson Reuters Foundation) – As diners arriving at the restaurant urged staff to shut the door on the bitter December wind blowing in from the street, those working in the kitchen were simply happy not to be sleeping out in the cold any longer.

The five rosy-cheeked men and women rushing up and down to prepare dinner for 30 guests all live in hostels in London and are working to secure deposits for their first homes. “The hostel where I am, it’s not a safe place,” 26-year-old Cameroonian Emmanuel Bejedi told the Thomson Reuters Foundation in between seating diners.

“Police come there every day. People fighting. Someone got stabbed in the canteen. Very scary. I pray I can get out of there as soon as I can.”

Bejedi works for Fat Macy’s, a social enterprise using London’s love of dining out to help the city’s homeless. The roaming supper club, run by volunteers living in temporary housing, pops up in different venues around the capital.

Homelessness is soaring in England due to rising rents, welfare cuts and a lack of affordable homes, charities say.

Nearly 80,000 households in England live in temporary accommodation, according to Britain’s Department for Communities and Local Government, the majority in London where rents are among the highest in Europe.

The average rent in London is 1,556 pounds ($2,076), according to the insurance provider HomeLet.

“Everyone in London thinks about homelessness. It’s something you see pretty much every day and it feels like it’s getting worse,” said Michaela Rhode, a diner at Fat Macy’s first Christmas supper club at the Luminary Bakery.

Rhode was one of 30 guests who paid 30 pounds to tuck into dishes such as pheasant and chicken pastilla and mince pie brownies in north London’s upmarket Stoke Newington.

“Coming along, having a really nice dinner and supporting a cause seems like a win-win,” she said.

After 200 hours of work, Fat Macy’s moves its volunteers into their own rented accommodation. It finds a suitable property and transfers the deposit directly to the landlord.

It then provides ongoing support to ensure tenants can budget, manage their outgoings and pay their rent on time.

As the volunteers rack up their hours, they get rewards for hitting milestones, including help securing identity documents, shoes and clothes for work, and travel money.

Fat Macy’s founder Meg Doherty, 27, first thought of launching the supper club when she was working in a homeless hostel and realised how hard it was for residents to move on.

“The more you earn, the less you receive in benefits so people get really trapped and there’s no way to earn enough to save a housing deposit to move out,” she said.

Noticing the energy and enthusiasm of participants in a Caribbean cooking class at the hostel, she thought there might be a way of harnessing their interest and passion for cooking.

“We could combine the two and create something that would allow people to get their deposits and move out of the hostel while learning new skills and working in a team,” she said.

Bejedi became homeless in London after arguing with his mother, who left him to be raised by relatives in Cameroon when he was nine months old.

They were reunited when he was 16 but soon fell out. She wanted him to be a lawyer; his heart was set on football.

After she kicked him out, Bejedi slept on night buses and in police stations before moving into a night shelter, where he spent three years, sharing a room with 25 others.

He said drug-taking was rife at the shelter and he has also witnessed knife crime at the hostel where he now stays.

“Someone got stabbed in the canteen where we have dinner,” he said. “That was the first time I had seen someone use a knife. And it wasn’t just once, he did it so many times.”

Bejedi, who had been busy arranging the place settings and welcoming guests with rosemary and clementine gin and tonics, described Fat Macy’s as his family.

“I will never forget what Fat Macy’s has done for me,” he said, as he has worked nearly 200 hours and hopes to move out of the hostel in 2018.

“I try not to give up, to be strong, stay on my feet. I wake up every morning and just thank God that I see another day.”

After 18 months and 70 events across all compass points of the city, Fat Macy’s recently raised 55,635 pounds by crowdfunding to find a permanent home.

“It’s quite different to run a catering company without your own kitchen and that’s our next step,” Doherty said. 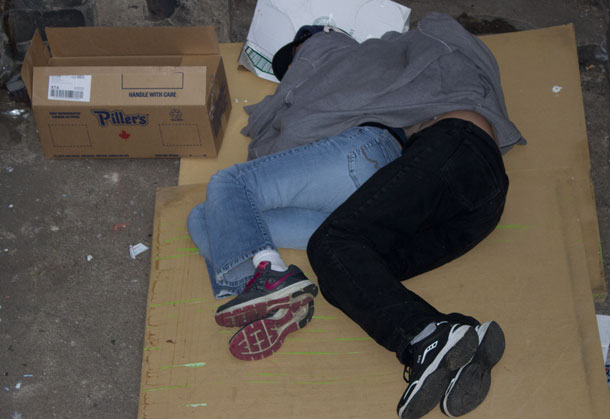