THUNDER BAY – SPORTS – This year’s annual Chill tournament is underway at the Tournament Centre.  This marks the 24th annual tournament for this association.  It is the biggest all-girls hockey tournament in Northwestern Ontario.  This year’s event will bring together teams with players as young as 4 years old and upwards of 17 years old.   This stellar tournament will see over 450 girls from across Northwestern Ontario including teams from Kenora, Dryden, Fort Frances, Emo, Nipigon, and Thunder Bay.

The tournament will feature preliminary action Nov 16, 17 and 18th for the regulation round at both Neebing and Tournament Centre rinks.  Sunday Nov 19, semifinals and finals will be held at the tournament centre only.

“Last year, we had great success with 34 teams.  This year we look forward to seeing this event continue to develop,” said Kasey Etreni, Tournament Chair for Thunder Bay Women’s Hockey Association. “Sporting events are an excellent way for young women to excel both on and off the ice.  This weekend is not just about the hard work the girls have done to get here but also the social aspect of the game”.  “Girls learn that teamwork divides the task and multiplies the success.”

TBWHA is a member of Ontario Women’s Hockey Association which has over 6000 Associations and over 30,000 girls and women playing hockey in the province.  Thunder Bay Women’s Hockey Association supports a junior division rep league of 5 Queen’s teams, a junior division house league of 26 teams, and a senior league of upwards of 17 teams of players made up from across the city of Thunder Bay and surrounding district.   Partnering with other hockey organizations throughout the city has enhanced this program and given these females more opportunities to develop hockey skills.  Since 1992, the Thunder Bay Women’s Hockey Association has established a respected and reputable program and teams that participate in games and tournaments across Canada and the United States – bringing home the gold medal in many events at both provincial and national levels. 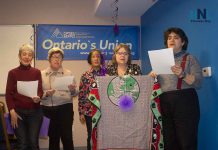