THUNDER BAY – The MV Algoma Equinox is under the command of Master Peter Schultz. This 720 foot long lake freighter is on of the newer ships on the Great Lakes. On Friday, the Algoma Equinox was loading grain at the Elevator on the Mission River. Captain Schultz took the time to give NetNewsLedger a Captain’s Tour of the ship.

This is a unique ship designed for shipping on the Great Lakes and St. Lawrence Seaway. The Algoma Equinox on this journey was making a long round trip from Thunder Bay with a load of grain down bound to Baie Comeau. Then onward to load with Iro 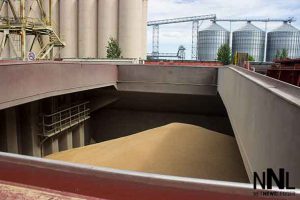 n Ore at the Port of xx which will be delivered to a steel mill in Hamilton. From there the ship journeys back to Thunder Bay to continue the cycle.

Captain Schultz has that calm professionalism about him that inspires his crew, and makes sure the job of loading and caring for the ship is done with the utmost of skill.

The Captain has been on the Great Lakes since the late 1970s.

The Equinox Class of bulk cargo carriers represents the next generation of Great Lakes – St. Lawrence Waterway ships. The Algoma Equinox is the first in a line of the new vessels.

It is a part of the parent company, Algoma’s $300 million investment in six Equinox Class vessels.

The scrubber units, manufactured by Wärtsilä are designed to remove 97% of sulphur oxide emissions generated by vessel engines.

The scrubber concept works with fresh water recirculating in a closed-loop system. Sulphur oxides are washed out of the exhaust then neutralized. Contaminants are disposed of at reception facilities in port.

There is a 45% improvement in energy efficiency over Algoma’s current fleet average resulting from the use of a modern Tier II compliant engine, increased cargo capacity, and improved hull form. In addition, a fully integrated IMO approved exhaust gas scrubber will remove 97% of all sulphur oxides from shipboard emissions. Basically what comes out of the stack is mostly steam.

The Algoma Equinox is also fuelled by delicious coffee.

Captain Peter Schultz is a roaster, grinder and brewer of some pretty amazing coffee.

The ship is manned by a crew of 16 and two interns. Each crew member has a private cabin, access to the exercise room, the galley where delicious meals are prepared.

There is a common area, with television and computer. Internet access in throughout the ship with Wifi.

Onboard the Algoma Equinox