On First anniversary of Ontario’s Statement of Reconciliation, the TRC Calls to Action must be enacted to address systemic issues that have plagued our Peoples since Confederation

THUNDER BAY – It has now been one year since Premier Kathleen Wynne delivered an emotional Statement of Reconciliation aimed not only at Residential School survivors, but also acknowledging the destructive provincial and federal policies which continue to harm our Peoples today.

While some progress has been made through the Journey Together commitments and the Political Accord with Ontario, we need to further our efforts and unleash our collective power as First Nations and all levels of government to ensure we provide the hope, opportunity and empowerment for the next generations.

Let me repeat some of the Premier’s statement from last year:

“Despite the promise of the early treaties, including the Two Row Wampum of respectful Nation to Nation relationships, Indigenous people became the target of colonial policies designed to exploit, assimilate and eradicate them.

“Based on racism, violence and deceit, these policies were devastatingly effective. They disempowered individuals and disenfranchised entire communities.

“When Canada became an independent country in 1867, the legacy of violent colonialism only gathered momentum. From coast-to-coast-to-coast, the residential school system removed Indigenous children from their homes to systematically strip away their Indigenous languages, cultures, laws and rights.

“Children were physically, emotionally, and sexually abused. Many died.”

As the Regional Chief of Ontario, I am calling upon all levels of government to work with our leaders on a four corner table process in the Spirit of Reconciliation to develop a plan going forward led by First Nations that will address the systemic issues that continue to plague our Peoples.

This work must flow from the perspective of implementation of the United Nations Declaration on the Rights of Indigenous Peoples (UNDRIP) and grounded in a nation-to-nation relationship based on recognition, rights, respect, and co-operation. Federal, provincial and municipal governments have all embraced the TRC Calls to Action. The key word here is ACTION – we need action now to provide our youth and future generations with hope and opportunity.

A progress report on the TRC Calls to Action will be presented at the All Ontario Chiefs Conference next month at Lac Seul First Nation. I hope to announce that a four corner table process will soon be underway which includes implementing the TRC Calls to Action.  For the sake of our children, our families, and our survivors, we must turn Reconciliation into action. 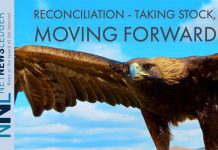