THUNDER BAY – The annual smelt run has started. Fishers gathered at the mouth of the Current River as the tasty little fish are running.

A hearty group of fishers was gathered to harvest the bounty last night, and report that the early start of the run is going well. Buckets of smelts were the result after some hard work on a crisp evening.

Fishing for smelts requires a net with a long pole. Swinging the net into the water allows the fisher to get, hopefully, a scoop of the little fish.

The smelts are running earlier this year than usual. Often it is early May before they are running. The early start is likely due to the milder conditions this past winter. Lake Superior had a far lighter ice pack.

Smelt typically are cleaned using scissors due to their small size. You can clean the smelt with scissors, some people cut off the head and then cut along the belly to remove the stomach and internals. Others simply cook the smelt whole.
It all comes down to your personal preference.
Whisk together flour and salt in a pie plate. Dredge the individual smelt in the flour mixture. Make sure that you coat both the outside and cavity of the fish.
To cook the smelt, heat oil in a frying pan us oil that is at least 1/4-inch deep and heat it up to medium heat until hot.
Place fish in the hot oil and fry until crisp and firm, it only takes about two or three minutes per side. 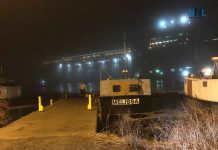