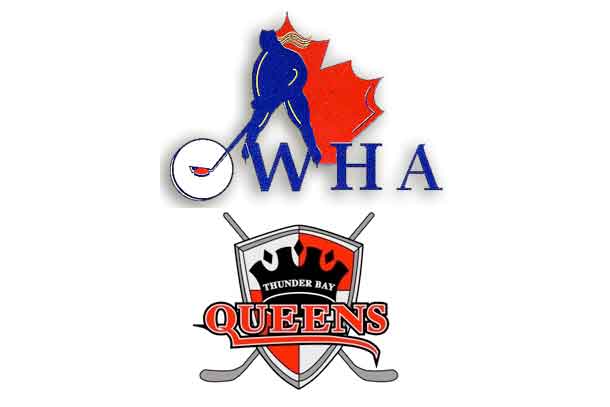 TORONTO, Ont. – The Thunder Bay Topper’s Pizza midget A Queens are off to the semifinals at Ontario Women’s Hockey Association provincial championships in Toronto.

They earned their way there after edging the Stratford Aces 2-0 in quarter-final action Saturday evening.

It was scoreless until 1:45 remaining in regulation when Riley Thompson notched the game-winner with assists going to Victoria Darosa and Hana Whalen.

Cassandra Carigni then added some insurance with 13 seconds remaining to secure the triumph.

The Queens will now meet the London Devilettes in Sunday’s semifinal at 9:45 a.m.

Finishing up round robin play earlier in the day the midget A Queens dropped a 3-0 decision to London.

Moving on to the play-in portion the club earned their quarter-final berth with a narrow 2-1 victory over the St. Catharines Brock Jr. Badgers.

St. Catharines got the first goal with less than four minutes remaining in the second period.

The Thunder Bay midget A’s drew level with five minutes left in regulation on a Carly Hennessey effort then got the game-winner with 2:06 to go as Thompson and Breanna Veneruz combined to set-up Brooke Herman for the difference maker.

Anjelina Badanai recorded the win in net for the Queens.

As for the other three Queens’ sides competing at the provincials, their respective seasons all came to a close Saturday.

Taking on the Oakville Hornets Saturday morning the midget AA’s skated to a 3-1 victory and earned themselves a quarter-final berth against the Chatham Outlaws.

In the quarter-final match-up with Chatham, the Outlaws opened the scoring in the first then went up by a pair early in middle session.

The Queens got one back midway through the second as Madeline Browczuk set-up Hannah Armstrong, but that’s as close as they would as they suffered the season-ending setback. Aden Johnson was in net for Thunder Bay.

Needing a win to advance to the playoff round the bantam AA Queens came up just short as they had to settle for a 1-1 tie against the Scarborough Sharks in their final round robin contest.

After a scoreless opening frame, Caitlyn McGuire sprung Alexis Paddington free while shorthanded as she out-waited the Scarborough netminder and scored to put Thunder Bay in front.

The Sharks tied it in the third, tipping a point shot over Lindsay Humeniuk’s shoulder to knot the affair with six minutes to go in the third.

Needing a victory to move on, the Queens pulled Humeniuk with a minute and a half to go and had a great opportunity late, but a shot whistled just wide before time expired and ending the game at 1-1.

Meanwhile the Tim Hortons bantam A’s wrapped up their campaign by skating to a 0-0 draw with the Grand River Mustangs.

Marissa Brosseau posted the shutout for Thunder Bay in that one.