THUNDER BAY – FEATURES – Long before the desert sun has had a chance to heat the dusty prison yard, some 20 inmates at an Arizona state prison begin quietly tending horses.

The men – many with violent histories – gently manoeuvre bits into the mouths of mustangs still unaccustomed to human touch; they remove caked mud from hooves and tighten girths against bulging bellies. And the horses, which just weeks ago roamed free, mostly comply with what is asked of them.

Both the men and the horses are still learning how to live behind fences.

Prisoners participating in the Wild Horse Inmate Program train mustangs that will eventually be adopted by the U.S. Border Patrol, providing the agency with inexpensive but agile horses, and inmates with skills and insights they hope to one day carry with them from prison.

For Brian Tierce, 49, who has served about five years of his seven-year sentence for domestic violence and assault, the horses have taught him “a lot of things I didn’t know I had in me – patience, perseverance, kindness, understanding.”

“I’ve got to be a compromising person, otherwise I’ll never get this job done.”

At least 80 percent of the U.S. Border Patrol’s current stable of 400 horses come from inmate training programs in Arizona, Colorado, Kansas and Nevada. The horses are critical for patrolling the rugged and remote stretches of the Mexican border to detect illegal crossings by migrants and drug trafficking.

Some 55,000 mustangs roam the Western U.S., more than double the number public land can support, said Bureau of Land Management spokesman Jason Lutterman. Those that do not end up in adoption programs face an uncertain future.

At the prison in Florence, a cactus-dotted town about 140 miles north (225 km) of the Mexican border, participating prisoners round up their horses before dawn and work all day under the watchful eyes of Randy Helm, the third-generation rancher, former narcotics officer and self-proclaimed “cowboy preacher” who supervises the programme.

Over the course of four to six months, the men train their horses – with names like Billy, Rocky and Patches – to tolerate bridles and saddles, respond to commands to trot and canter and perform footwork that will come in handy on the uneven desert terrain along the border.

Helm, 62, teaches the men not to “break” the horses, but to “gentle” them. The method relies on incremental steps and rewarding the horses for good behaviour. Any inmate that raises a hand to a horse gets booted from the programme.

“It’s more working on us than on them,” said Rick Kline, 32, who has served five years of a seven and a half year sentence for stealing cars. “It’s a new understanding of calming down.”

He hopes to apply that skill of staying calm to parenting his two kids when he gets out of prison.

Bret Karakey, 35, who is in prison for identity theft, recently broke his hip when he was thrown from a horse. But he came back without hesitation.

Most prisoners who apply for the programme don’t have experience with horses, and Helm prefers it that way. They tend to be gentler with the animals.

Florence began its horse training programme in 2012, and while it is too early to assess the long-term effects on participating inmates, of the 50 or so who have gone through it and been released, none has returned to prison, Helm said. The national recidivism rate is about 68 percent within three years of release.

Helm says he sees real transformations in inmates who stay with the programme.

“A lot of them haven’t really bonded with a person, let alone an animal,” he said. “It’s been really interesting to observe these guys’ lives change.”

U.S. Border Patrol adoptions are key to the government’s effort to stem the nation’s growing population of mustangs. A federal law passed in 1971 tasked the Bureau of Land Management with managing wild horse and burro populations in the American West, both to protect the animals and to ensure that vegetation was not overgrazed and water sources depleted.

But with the soaring cost of hay and dwindling public interest in horse ownership, the BLM can place only about 2,000 into adoption each year, severely limiting the number it can capture from the open desert and plains, Lutterman said.

Fifteen years ago, the BLM was rounding up more than 10,000 mustangs and putting about 6,000 into new homes each year.

Border Patrol is the biggest single purchaser of mustangs from the inmate programs.

On horseback, the agents can navigate desolate stretches land that vehicles cannot. The mustangs are sure-footed on steep terrain, crossing creekbeds without hesitation and stepping spryly over rattlesnakes.

“It really feels like the Wild West out where we patrol for sure,” said Bobby Stine, supervisory agent of the San Diego Sector Horse Patrol Unit. “There’s just not a lot of law enforcement presence, except for us.”

The border is an unforgiving place; just 654 miles of fence exist between the United States and Mexico, accounting for about a third of the border. The rest is defined by mountains, rivers, private ranches and wild country – terrain more suited for horses, which all agents had back when Border Patrol was founded in 1924.

The San Diego border patrol unit has 28 horses, and the Tucson unit more than 130. Fifteen horses from the Florence prison were adopted in 2014 and 2015.

The task of the Florence inmates who train the horses is, at times, thick with irony: Some are Mexican nationals, apprehended on the border for drug-related offences.

The inmates, though, say they don’t mind that the horses help law enforcement. They are simply happy the animals no longer face thirst and starvation in the drought-stricken West.

“All the ‘inmates against cops’ stuff – that’s not true,” said Kline. “They’re just doing their job. And we’re doing our job. These horses depend on us.”

Clothes make the man … until the very end 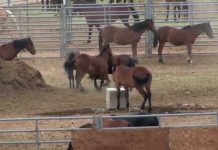 Heinz Ketchup on your Ford Car?