THUNDER BAY – “Parks Canada and its team members are custodians of Canada’s treasure chest of irreplaceable natural and cultural heritage, and we are pleased to recognize Fort William Historical Park as an important and vibrant part of Ontario’s and Canada’s cultural richness. Parks Canada is proud to be part of Canada’s tourism industry; together we help Canadians celebrate and protect their national treasures, build Canada’s reputation as a destination of choice for visitors from around the world, and grow opportunities for sustainable local economies,” says Daniel Watson, Chief Executive Officer, Parks Canada.

Sergio Buonocore, General Manager of FWHP, comments, “The Fort is extremely proud to be recognized with this prestigious award. It is through the hard work and dedication of the staff here at FWHP, that we continue to rise to the top of our industry and gain national attention for our efforts. I would like to extend my personal gratitude to everyone working here at the Fort for your relentless pursuit of excellence and our collective journey of cultural education and celebration.”

Fort William Historical Park has previously won a TIAC Award in 2006 in the “National Event of the Year” category for “Rock the Fort”.

Fort William Historical Park in Thunder Bay, Ontario, is named as the “world’s largest fur trading post” with 57 heritage and modern buildings on 250 acres. This national historical site is devoted to re-creating the days of the North West Company and the Canadian fur trade as life existed in 1815 with costumed guides. Aside from its historical programming, Fort William Historical Park also offers a variety of programs including overnight experiences, education programs, artisan workshops, conferences, banquets, festivals, and recreational opportunities.

The Canadian Tourism Awards are presented annually by TIAC to recognize success, leadership, and innovation in Canada’s tourism industry, and to reward those people, places, organizations, and events that have gone above and beyond to offer travellers superior tourism experiences. 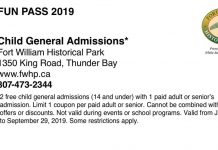