THUNDER BAY – Habitat for Humanity Canada is marking today – World Habitat Day – by announcing that former U.S. President Jimmy Carter and his wife Rosalynn will be in Canada for Habitat for Humanity’s 34th Jimmy and Rosalynn Carter Work Project in July, 2017 to help build 150 homes for Canada’s 150th anniversary.

This will be Habitat Canada’s biggest build project ever and will take place in every province and territory across the country with President and Mrs. Carter focusing their efforts in Edmonton, Alberta, and in Winnipeg, Manitoba.

“It is an honour to host President and Mrs. Carter. We are grateful for their support and the many volunteers whose commitment to Habitat’s mission has helped us empower communities through affordable home ownership,” said Mark Rodgers, President and CEO of Habitat for Humanity Canada. “These are homes that provide families with the strength, stability and independence they need to build a better life.”

Habitat Canada has a long history of creating affordable housing opportunities. One in seven households, including 735,000 children, do not have a decent and affordable place to call home in Canada. Every day thousands of families are forced to decide between paying rent or putting food on the table. Habitat’s model of affordable home ownership helps to change that.

People living in Habitat homes not only help to build their own houses, they also pay affordable mortgages. Habitat for Humanity’s innovative approach helps working families on a new path to better, affordable living conditions that lead to improved health and stronger childhood development. Access to affordable home ownership can help decrease a family’s reliance on food banks and allow them to move out of social housing which frees up space for those on waiting lists.

Everyone in Canada has the right to a safe, affordable and decent place to live in and yet so many families do not have that. By supporting the Carter Work Project, Canadians can help build a more caring nation through volunteering – where neighbours help neighbours build homes that provide a safe and affordable foundation for a better life.

Since 1984, President and Mrs. Carter have traveled around the world with Habitat, to build and improve homes. Their time and effort helps to raise awareness of the critical need for affordable home ownership around the world. Inspiring millions over the last three decades, President and Mrs. Carter have worked alongside nearly 100,000 volunteers in 14 countries to build, renovate and repair more than 4,000 homes.

Habitat for Humanity Canada would like to thank the early supporters of the 34th Jimmy and Rosalynn Carter Work Project! There are still many exciting sponsorship opportunities available. To find out about how your company or organization can be involved, please go to www.habitat.ca/cwp.

Habitat for Humanity Hammers Back at Harvey

Habitat for Humanity Sets up for Success in 2016

Helping Out at Habitat for Humanity 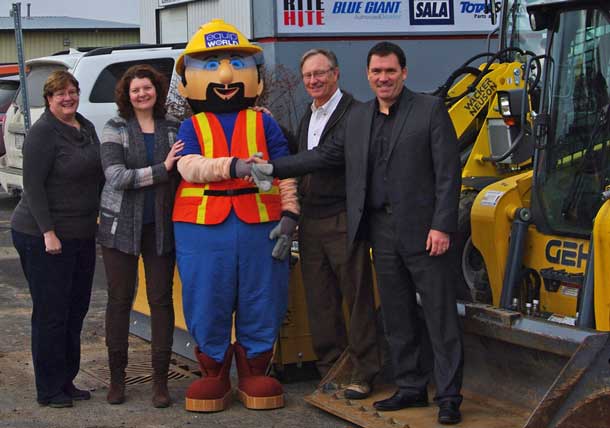