WASHINGTON, Aug. 1, 2016 — At the request of the Libyan Government of National Accord, the U.S. military conducted precision airstrikes today against Islamic State of Iraq and the Levant targets in Sirte, Libya, Pentagon Press Secretary Peter Cook told reporters in a news briefing.

The airstrikes were in support of GNA-affiliated forces seeking to defeat ISIL in its primary stronghold in Libya, Cook said.

The strikes, Cook said, “are consistent with our approach to combating ISIL by working with capable and motivated local forces.”

“GNA-aligned forces have had success in recapturing territory from ISIL thus far around Sirte,” he added, “and additional U.S. strikes will continue to target ISIL in Sirte in order to enable the GNA to make a decisive, strategic advance.”

The United States has a variety of assets and capabilities in the region that officials believe are adequate for the task, said the press secretary added.

The U.S. military and the GNA agreed that precision strikes on an ISIL tank and two ISIL vehicles in Sirte were necessary to avert risk to the GNA and the civilian population, Cook said. GNA forces believed it would make a difference in their strategic advance to eliminate the tank, which was in a strategic position within Sirte, Cook said, adding that the vehicles apparently also posed a similar threat to GNA forces on the ground who are trying to recapture a particular Sirte neighborhood.

“The ability to strike [these targets] precisely without exposing civilians to risk was the reason that strike was conducted,” he said.

The United States stands with the international community in supporting the GNA as it strives to restore stability and security to Libya,” the press secretary told reporters. “These actions and those we have taken previously will help deny ISIL a safe haven in Libya from which it could attack the United States and our allies,” he added.

Cook emphasized that Libyan local forces have been successful so far as they take on ISIL, and the GNA has not asked for U.S. assistance until now. “They see where ISIL has dug in and [how] our operations can assist them,” he said. Such U.S. operations in Libya could continue when requested, as the two nations carefully coordinate and vet such operations, he added.

Similar to the assistance provided in Iraq and Syria in the counter-ISIL campaign, the press secretary said, “we’re acting in support of the internationally recognized government of Libya, helping their effort to target an enemy that poses a threat as well to the United States.”

The airstrikes exemplify U.S. military support for a partner on the ground trying to reclaim its country and provide security and stability for its people, Cook said, while “targeting a group that has a hateful ideology that aims to do ill to the people of Libya and to the people of the United States. 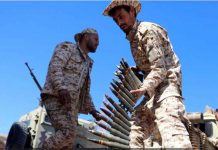