THUNDER BAY – BUSINESS – On May 17th 2016 creditors will vote on a proposal by Wasaya Limited Partnership, Wasaya Leasing and Wasaya General Partner Limited pursuant to the Bankruptcy and Insolvency Act of Canada which was presented on April 26th 2016. All three of these companies hereinafter will be referred to as Wasaya.

The proposal if accepted, would see over time payments of $0.10 paid out for each dollar of money owed to the Unsecured Creditors. 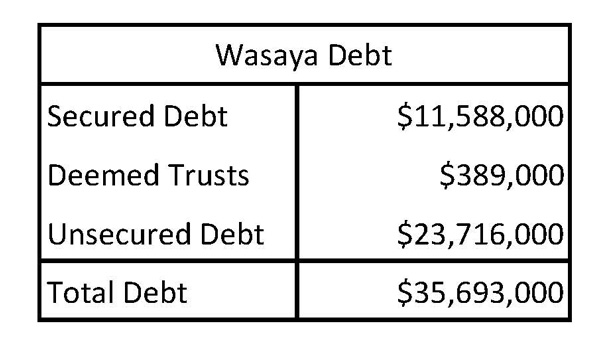 Table 2 below estimates the Net Realization of Wasaya’s Assets as $8,295,000 and a total Secured Creditor amount of $11,588,00. If the proposal does not get accepted, the Secured Creditors would be out $3,293 million dollars.

Under the terms of the proposal, the secured creditors are not taking action, according to Fred Florence, the Insolvency Trustee from Vine and Williams. Wasaya’s financing agreements with RBC and BDC would remain in place. The restructuring of the Debtors financial position leaves the Secured Creditors outside the proposal.

The current First Nation community partners of Wasaya are:

Table 3 below shows the total amount of certain First Nation Unsecured Creditors is $9,615,566. If the proposal is approved, they would be entitled to 10 cents on the dollar for a revised total unsecured credit of $961,557. This amount would be reinvested back into Wasaya as an unsecured loan. This would represent a loss of $8,654,010 for these First Nations. 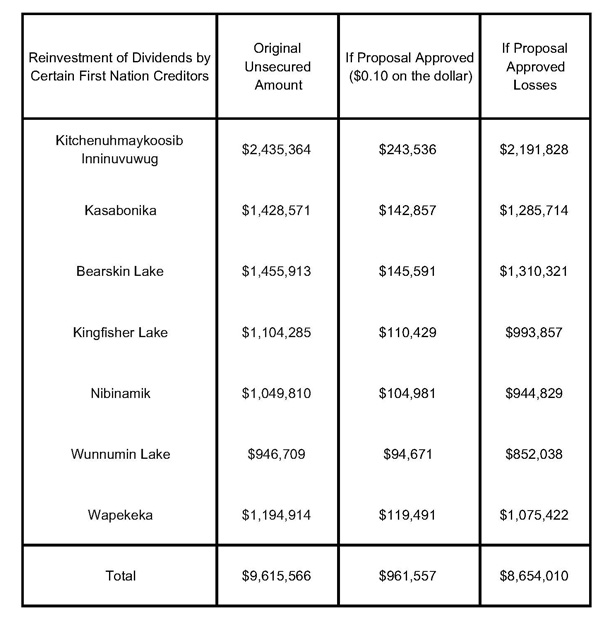 The full impact to the First Nation owners regarding the outcome from the May 17th 2016 is still not clear.

Florence tells NetNewsLedger that the short-term results of the restructuring of the debtors financial position are to keep the airline flying.

Transportation is key for northern communities. That is one of the points that Wasaya is making to its creditors. Sources tell NNL that Wasaya has been making presentations to the Band Councils in member communities seeking support for the proposal.

The long-term impact for Wasaya remains hard to determine. Members in the communities are going to eventually make decisions on the future of their community investment(s).

That communities, like KI are left with a loss of over $2.1 million is likely to leave many needed community projects waiting for future funding.

The impact from the restructuring of the Debtors financial position, if accepted, also places many of the suppliers in the position of demanding payment in advance for services rendered to the company in the future.

There is also an impact on some of the northern communities in Northwestern Ontario as the company’s financial decisions have left large debts with airports across the north.

Sioux Lookout Airport Authority for example, a major hub for Wasaya is left with a bill of $316,000.

Regardless of the upcoming decision, many will be impacted.

Wasaya Group was contacted for comment on this story. So far there has been no response.

Wasaya – 2016 04 26 Trustees Report to Creditors on Proposals of WALP WGPL and Leasing by NetNewsLedger.com