THUNDER BAY – SPORTS – The warming weather across Canada is bringing golf season to a start. For professional golfers, the Mackenzie Tour – PGA TOUR Canada Tour is gearing up with the USA West Qualifying Tournament.

Chin finished the week 14-under, one stroke ahead of Rancho Santa Fe, California’s Colin Featherstone, earning him fully exempt status on the Mackenzie Tour for 2016.

“It was a lot of fun out there. My goal was just to try and limit my mistakes and not make any bogeys. Colin’s putter got hot at the end there and made things interesting, but it was a lot of fun,” said Chin.

The win comes on comfortable territory for Chin, who was victorious at Carlton Oaks for the second time in as many weeks, having claimed a Golden State Tour event last week in a warm-up for Q-School.

“I had a lot of confidence coming into this week, so I was just saying ‘why can’t I do it again?” To see the results on top of the hard work, it feels good,” said Chin.

A former Web.com Tour member, Chin said he entered 2016 with renewed focus after missing out at the second stage of Web.com Tour Q-School last fall, and that his offseason preparation paid off over the course of the week.

“The last two days, my ballstriking was a little shaky, but that’s what I practice for – my misses didn’t hurt me too much. Anyone can hit it well, but it’s about when you’re grinding that really counts,” said Chin.

For the week, 40 players in total earned status for the 2016 Mackenzie Tour season.

Below are notes on the top 16 players from this week’s Q-School:

COLIN FEATHERSTONE: Former San Diego State Aztec was a teammate of 2015 Player of the Year J.J. Spaun and caddied for him at the 2016 Northern Trust Open.

RYAN BURGESS: SMU Grad is coached by Cameron McCormick (instructor to Jordan Spieth), captured one individual collegiate win and helped SMU to the NCAA Championships in 2014 and 2015.

JEFFREY KANG: USC grad was named an NCAA All-American in 2012 and helped his team to the 2011 Pac-10 Championship.

NICK DELIO: California State-Northridge grad won four times individually in college and was the 2013 Dakotas Tour Player of the Year.

BYRON METH: 2015 Honourable Mention All-American at the University of the Pacific won the 2014 U.S. Amateur Public Links and competed at the 2015 Masters Tournament.

MANAV SHAH: Former UCLA Bruin turned professional in 2015 and will have Mackenzie Tour status for the first time.

COREY HALE: Native of Newcastle, Australia has played on the Australian PGA Tour and the OneAsia Tour and plays golf left-handed even though he is right-handed.

MICHAEL TOLLADAY: Former Pacific University Tiger claimed a spot in the top-16 in a 4-for-1 playoff on the second extra hole.

“I can’t wait. I’m really excited to play up in Canada. There are few places I’d rather be than up there for the Summertime, and I’m going to get some more experience under my belt. I’m only 19, so I’m just taking everything as it comes and just trying to learn as much as I can every week. It’s been up in the air this year not knowing exactly when and where I’m going to be playing, so it’s nice knowing I can go ahead and plan my schedule.” – Former Golf Canada National Amateur Team member Austin Connelly on earning status on any Tour for the first time.

“To come out here under this pressure and play the way I did, I’m pretty proud of that. I’ve played two events before, but chasing those Monday Qualifiers can be tough, so it’s great to settle down, have a gameplan and try to do it.” – Toronto, Ontario’s Andrew Ledger on earning Mackenzie Tour status for the first time.

Miller leads Players Cup by one 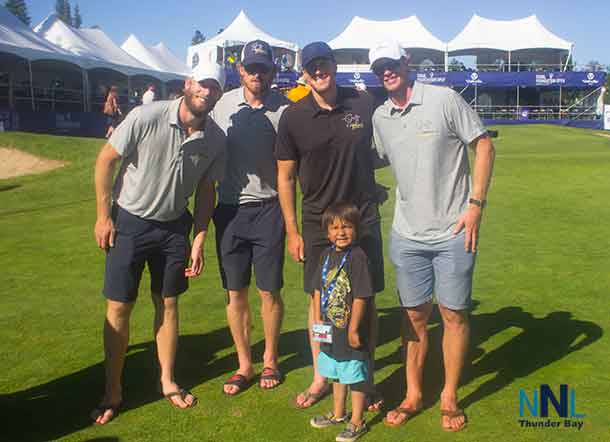