Drivers across the city played bumper cars on city streets as the weather combined elements to make driving a real challenge. At one point yesterday, Thunder Bay Police closed off High Street due to icy conditions.

As many as nine sanders and five graders were deployed across the City prior to 6:00PM EDT yesterday evening, when roads crews were required to cease operations to rest for a mandatory eight-hour period before the 2:00AM plow. The City Roads Department reports that four sanders ran through the night to ensure major intersections were sanded and to respond to requests from emergency services.

Beginning at 2:00AM this morning, full winter operations were in effect with as many as twenty-two graders and eight plows deployed. Mainline plowing is primarily complete and any outstanding routes are expected to be completed by noon today. Operators who have finished their mainline routes will proceed into their designated residential areas this morning and into the rest of the day.

Sidewalk snow clearing began at 3 am this morning, and completion of main routes is anticipated by noon today. This equipment will proceed into their designated residential areas when their mainline routes are complete.

“It is difficult to forecast when all plowing will be complete due to the weight of the snow that requires clearing, varying amounts of accumulation throughout the City, and the ongoing snowfall,” said Brian Kral, Acting Manager – Roads. “We encourage all drivers, pedestrians, and cyclists to exercise extra caution on their commutes while City crews continue their operations.”

The weather, with temperatures near freezing, coupled with the snow made icy conditions the normal.

There were thirty accidents on the North side and thirty-one on the South side of Thunder Bay.

The city pulled crews off the roads at 6PM to met mandatory rest period requirements.

Today snow clearing started at 02:00 AM EDT with sanders, graders, and sidewalk plows out in full force. 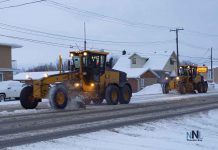 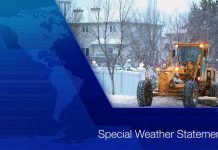