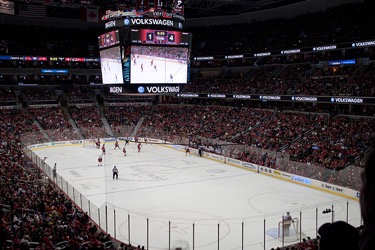 THUNDER BAY – SPORTS – We’re over halfway through the NHL regular season and the Washington Capitals are looking very strong at the top of the NHL standings. After 53 matches, the Capitals have lost just nine games this year and are certainly viable contenders for the Stanley Cup this season. In years gone by, Washington have crumbled in the playoffs but Barry Trotz’s men are looking like the complete package and will fancy their chances of eradicating their previous mistakes in 2016. Can they do it? We take a look at their chances of winning the biggest prize in hockey.

Incredibly, the Washington Capitals have never won the Stanley Cup. In fact, they were thrashed 4-0 by the Detroit Red Wings in their only Stanley Cup finals appearance back in 1998. This year, though, that could all change. The Capitals have been the most consistent side by far during the regular season and this may finally be their time to shine.

At the time of writing, gamblers betting on NHL prospects can get 37/10 on Washington to go all the way and lift the Stanley Cup this season. Of course the Capitals could implode in the postseason but based on their current form, they stand a great chance of breaking the duck in 2016.

As of February 12th, Washington currently lead the NHL in Power Play percentage – which is a key reason for their high league standing. Although they have been limited to just 165 opportunities, they have scored 40 times at a success rate of 24.2% and one of the biggest reasons for their success is Alexander Ovechkin.

At just 30 years old, the Russian is one of the best players in NHL history and is central to Washington’s chances. Many believe that Ovechkin could be the greatest scorer of all time and it would be difficult to argue against that belief. In a recent clash with the Minnesota Wild, Ovechkin netted a second period hat-trick – just one of his many achievements that could support such a statement.

So, everything is rosy at Washington now but can they keep their cool in the playoffs? Head coach Barry Trotz has plenty of NHL experience but his playoff record isn’t exactly great. In 16 years, his teams have made the postseason eight times but none have advanced past the second round of the playoffs.

Trotz has led the Capitals to a sensational regular season, which included a recent road victory against former side Nashville Predators, but the true test will come in the playoffs. Can he lead them to the Stanley Cup finals? Simply put, yes… but he must keep the likes of Ovechkin as fresh as possible for the gruelling postseason schedule.

So, will Washington win the Stanley Cup? Well, it’s still too early to call right now. They can win it but ultimately, it will come down to their own self-belief. In terms of talent, of course they can go all the way. But if they don’t believe in themselves, there’s no point competing in the postseason. Grit and determination will come into it and their chances will hinge on just how much the players, coaches and backroom staff want to get their hands on their first Stanley Cup.