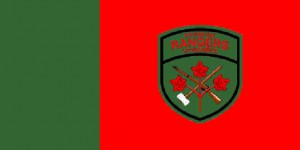 ATTAWAPISKAT – NEWS – Two Canadian Ranger search teams are credited with saving the life of a seriously injured man who crashed his snowmobile while driving in the dark on the winter road between Attawapiskat and Kashechewan.

The man was driving and pulling a toboggan from Attawapiskat to Moosonee when the lights on his snowmobile failed and he continued driving at high speed. He failed to see a small frozen creek and his snowmobile carried him in the air over it and onto the opposite bank. He was thrown from the snowmobile and suffered a broken arm and ribs and an injured leg. Because of the injuries to his chest he had difficult breathing.

The temperature at the time was -28C with a wind chill of -37C.  A resident of Attawapiskat, he was unable to start a fire or help himself beyond using his satellite phone to reach a friend in Attawapiskat, who alerted the local Nishnawbe-Aski Police.

The crash happened at about 6.30 p.m. on Boxing Day at Cudmore Creek, near the half way point between Attawapiskat and Kashechewan, which are about 90 kilometres apart.

A two-man Ranger team from Attawapiskat and a four-person team from Kashechewan found him at about 11.30 p.m.  They arrived within minutes of each other.

“He was already hyperthermic when we got to him,” said Sergeant Redfern Wesley, commander of the Kachechewan Ranger patrol. “It was very cold and he’d been unable to light a fire. He had gone without heat for five hours and he was in a lot of pain. If we hadn’t got there when we did he would not have lasted.”

The Rangers got a warming fire going, gave the man hot tea, stabilized him, and made him comfortable while waiting to see if a medivac helicopter would be sent for him.  A civilian medivac pilot said he could not land in the area and a military helicopter was delayed because of the threat of freezing rain in southern Ontario.

“When we heard a chopper was not going to land we made the decision to take him to Attawapiskat, which was closest to us,” Sergeant Wesley said.

The Rangers used tree boughs, plywood, and foam rubber to make the man as comfortable as possible in a toboggan and covered him with blankets and tarpaulins to keep him warm while they transported him to the hospital in Attawapiskat, with frequent stops to give him tea and check on his condition. He was admitted to the hospital where, after treatment, he was reported to be in good condition.

“This rescue was a great example of co-operation between the two patrols and the abilities and skills of the Rangers,” said Lieutenant-Colonel Matthew Richardson, commanding officer of the 3rd Canadian Ranger Patrol Group. “They did a good job.”

“It’s another life saved by the Rangers,” said Sergeant Jamie Stirling, provincial search and rescue co-ordinator for the Ontario Provincial Police. “The Rangers are certainly a help to us in the difficult conditions of the North of Ontario. Saving lives in the North is a challenge. It’s very different to Southern Ontario. The Rangers do a very good job.”

The rescue, he said, was the 14th search and rescue mission the Rangers have done this year on behalf of the OPP, which is the lead agency for search and rescue in Ontario. In most cases, weather and time constraints mean the Rangers have completed a search before the OPP can assemble a search team and fly it into an isolated First Nation community.