THUNDER BAY – FOOD NOW – It all began (or shall I say culminated?) on a boat with a friendly competition between friends. We were cruising along the coast of southern Mexico on the Mindy, Larry Mindel’s beautiful yacht, when my friend and famed restaurateur challenged me to a margarita competition.

I measured my ingredients carefully into a cocktail shaker and loaded it with ice. After shaking so vigorously my hands turned numb and frost coated the metal cup, I strained the magical elixir into a chilled glass garnished with a lime wheel and handed it to Larry. In my clear-as-day memory, he took one sip and declared, “This is the best margarita I’ve ever had.” Larry tells a different tale, one in which his cocktail was the victor, but we all know tequila has a tendency to do that to people.

Regardless of the details, my way with tequila inspired Larry to propose opening a restaurant together. Though I’d never told anyone, opening my own restaurant had always topped my bucket list, but only if I had the right partner. With a résumé as long as my arm, including nearly 100 successful restaurants like Chianti in Los Angeles, Prego in San Francisco and the Il Fornaio restaurants all over the West Coast, Larry Mindel was certainly the perfect partner. He was also smart, worldly and dashingly handsome. I was thrilled and terrified, but mainly I was worried it was just the tequila talking. I desperately hoped something would actually come of Larry’s proposal.

My lifelong love affair with food began on my grandparents’ farms (yes, plural — both my maternal and paternal grandparents ran farms in New England), infusing me with a passion for seasonal, homemade, homegrown and artisanal food. I had forged a successful career in the food industry without working in a restaurant since my days as a cook at Chez Panisse in the mid-1980s. And yet I always suspected owning a restaurant was something I was destined to do.

Each step in my winding culinary journey through the world laid the foundation for restaurant ownership. During a rigorous year with Madeleine Kamman earning my Master Chef degree, I learned that loving food meant knowing it inside and out: the origin, history and science behind a dish. Madeleine taught me to sample and truly taste the nuances of individual ingredients and dishes as a whole. She was tough and didn’t take any crap, another lesson that’s served me well in the food world, and life in general.

I followed up my studies with Madeleine at Alice Waters’ Chez Panisse, my culinary mecca. At the time, Chez Panisse was at the epicenter of the California food revolution, and I was lucky enough to experience everything firsthand. Committed to serving seasonal, local, organic and sustainable food, the restaurant let California’s abundant ingredients speak for themselves without masking their flavor, a philosophy that inspires my cooking to this day. Chez Panisse confirmed what I’d intuited on the farm: highest-quality, fresh ingredients are paramount to good cuisine.

As I’ve traveled the world teaching cooking classes in some of the most picturesque locations, I continue to reaffirm that the quality of your ingredients will make or break a meal. Many of my favorite travel memories include trips to the local market — whether shopping the Rialto in Venice, the souk in Marrakech, or the Ferry Plaza Farmers Market in my adopted hometown of San Francisco, the market truly is my happy place.

Surrounded by beautiful, fresh, seasonal ingredients, I am inspired. I always take ideas home with me from my journeys — from markets, local restaurants, purveyors and friends I encounter along the way. I am literally bursting with ideas … ideas that desperately need a restaurant menu as an outlet. I’d done everything else, and the idea of a restaurant was still gnawing at my heart. I wanted to put everything I’d learned along the way from my grandfather, my mother and my travels to work all in one place and see a restaurant come to fruition. It would be fun, creative and truly the challenge I was looking for.

So when, a few months after that fated cruise and margarita competition, I found myself looking at restaurant spaces with Larry, I decided it was finally time to reach my destiny. Thirty years after my first stint in the kitchens of Chez Panisse, I’m back in the exhilarating environment of a restaurant, this time at the helm of Copita Tequileria y Comida in beautiful Sausalito, California. Our menu is seasonal, changing regularly based on inspiration and availability of fresh ingredients. I know for a fact my grandparents would be proud.

It feels like this kitchen gypsy’s culinary journey has finally landed her home. Thank goodness for friends. With boats. And margaritas.

Place the tequila, agave nectar, water, lime juice and plenty of ice in a cocktail shaker. Shake vigorously for 5 seconds or until you see the frost on the outside of the shaker. Place 1 ice cube in a glass. Strain the margarita into the glass and garnish with a lime wheel.

Joanne Weir is a James Beard Award-winning cookbook author and judge, international cooking teacher and chef. Her award-winning PBS series, “Joanne Weir’s Cooking Class” and “Joanne Weir’s Cooking Confidence” shares her love of cooking with a national TV audience. Her newest TV series “Joanne Weir Gets Fresh” began airing nationally in January 2015. Joanne’s first cookbook, “From Tapas to Meze” (Crown, 1994) was nominated for a James Beard Award and selected by Julia Child as one of her 12 personal favorites out of 1,000 cookbooks published that year. Her latest cookbook, “Kitchen Gypsy: Recipes and Stories from a Lifelong Romance with Food” (Oxmoor House, 2015) pairs 100 new recipes and 250 photographs with her favorite food memories. 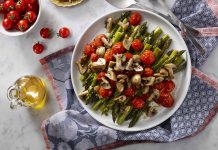 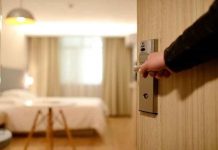