North American riders dominated at the 2015/16 ice cross downhill season opener in Quebec City, sweeping the podiums in the men’s and women’s. The USA’s Cameron Naasz powered to the men’s victory, while Canada’s Myriam Trepanier clinched gold in the women’s event.

QUEBEC CITY, Quebec (Canada) – On a crisp, clear Canadian evening, the holiday lights seemed to shine in celebration of the landmark tenth anniversary of Red Bull Crashed Ice in Quebec City, and North American riders gave the packed house of fans lining the 460-meter-long track plenty to cheer about. In the opener to the biggest season in ice cross downhill – where athletes race in four-person heats at speeds reaching 50 km/h (31 mph) on ice tracks loaded with jumps, drops and turns – Cameron Naasz of the USA confidently claimed the top of the men’s podium, with Canadians Dean Moriarity and Scott Croxall in second and third. Kicking off the fight for the women’s World Championship, Canadians swept the medals with Quebec’s own Myriam Trepanier earning first, Maxie Plante second, and Elaine Topolnisky rounding out the podium.

The men’s results proved that the friendly but intense rivalries of the 2015 season – when Croxall earned the World Championship with Naasz and Moriarity in second and third overall – will only intensify, especially as Croxall is aiming to become the first rider ever to earn back-to-back titles.

Naasz, who on Friday night had joined forces with Croxall in earning the victory in the team competition, said, “We’re buddies, but when we’re up against each other we go hard. Winning a first World Championship means everything to me – it’s why I train so hard all year long, and this is a great start.”

In the team competition on Friday night, the 2015 World Champions Living the Dream, which includes not only Naasz and Croxall but also Adam Horst, extended their winning streak to three events in defeating a tough challenge from an American entry, Team UNRL, in second. Another team of athletes from Canada and the USA, Team Steal17, was third to complete another all-North American podium.

The European riders of ice cross downhill – including Switzerland’s Kilian Braun, France’s Tristan Dugerdil, and Austria’s Luca Dallago, who finished fifth, seventh, and eighth respectively on Saturday night –will get a chance for home turf revenge as the season continues with the first Riders Cup stop in Wagrain-Kleinarl, Austria on December 18-19, 2015, and Red Bull Crashed Ice Munich on January 8-9, 2016. 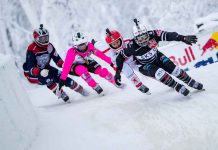