PARIS (Reuters) – Police raided homes of suspected Islamist militants across France overnight following Friday’s Paris attacks, and a source close to the investigation said a Belgian national in Syria was the possible mastermind.

Prosecutors said one of the killers had been stopped and fingerprinted in Greece last month, fuelling speculation that Islamic State had taken advantage of the recent influx of refugees fleeing the Middle East to slip militants into Europe.

The carnage, which killed 129 people, has led to calls for the European Union to close its borders to asylum seekers.

Islamic State, which has claimed responsibility for the attacks in retaliation for French airstrikes in Iraq and Syria, warned in a video on Monday that any country hitting it would suffer the same fate, promising specifically to target Washington.

French warplanes bombed Islamic State training camps and a suspected arms depot in its Syrian stronghold Raqqa late on Sunday — its biggest such strike since it started assaults as part of a U.S.-led mission launched in 2014.

Much of France came to a standstill at midday for a minute’s silence to remember the dead. Metro trains in Paris stopped, pedestrians paused and office workers stood at their desks.

Interior Minister Bernard Cazeneuve told reporters police had arrested 23 people and seized arms, including a rocket launcher and automatic weapons, in 168 raids overnight. Another 104 people were put under house arrest, he said.

“Let this be clear to everyone, this is just the beginning, these actions are going to continue,” Cazeneuve said.

The investigation into the coordinated Paris attacks, the worst atrocity in France since World War Two, led swiftly to Belgium after police discovered that two of the cars used by the militants had been rented in the Brussels region.

Dozens of Belgian police and armed commandos surrounded houses on Monday in the Brussels district of Molenbeek, which is home to many Muslim immigrants.

Police arrested seven suspects in Brussels over the weekend, five of whom have been released, and are hunting Salah Abdeslam, a 26-year-old Frenchman based in the Belgian capital, who is one of three brothers believed to have been involved in the plot.

A source close to the investigation said Belgian national Abdelhamid Abaaoud, currently in Syria, was suspected of having ordered the Paris operation. “He appears to be the brains behind several planned attacks in Europe,” the source told Reuters.

French prosecutors say they have identified five of the seven suicide attackers who died on Friday. Four were French, while the fifth man was stopped and fingerprinted in Greece in October and was possibly Syrian.

“We know that more attacks are being prepared, not just against France but also against other European countries,” Prime Minister Manuel Valls told RTL radio. “We are going to live with this terrorist threat for a long time.”

France has declared three days of national mourning and President Francois Hollande will make a rare address to the joint upper and lower houses of parliament later in the day at the Palace of Versailles, just outside Paris.

Schools in Paris re-opened on Monday, and many museums were due to open their doors in the afternoon after a 48-hour shutdown, but some popular tourist sites, including Disneyland, remained closed.

French tourism-related stocks fell sharply on fears visitors might avoid Paris, one of the most visited cities in the world, but the country’s blue-chip CAC 40 index was steady, with no long-term economic impact seen.

Police have named two French attackers — Ismael Omar Mostefai, 29, from Chartres, southwest of Paris, and Samy Amimour, 28, from the Paris suburb of Drancy. A source close to the investigation named two other French assailants as Bilal Hadfi and Ibrahim Abdeslam.

A Turkish government official said Ankara had notified France twice in December 2014 and June 2015 about Mostefai, who entered Turkey in 2013 with no record of him leaving again. France only called back about him after Friday’s events.

“This is not a time to play the blame game, but we are compelled to share (this) information to shed light on (Mostefai’s) travel history,” the Turkish official said.

Latest official figures estimate that 520 French nationals are in the Syrian and Iraqi war zones, including 116 women. Some 137 have died in the fighting, 250 have returned home and around 700 have plans to travel to join the jihadist factions.

The man stopped in Greece in October was carrying a Syrian passport in the name of Ahmad Al Mohammad. Police said they were still checking to see if the document was authentic, but said the dead man’s fingerprints matched those on record in Greece.

Greek officials said the passport holder had crossed from Turkey to the Greek islands last month and then registered for asylum in Serbia before heading north, following a route taken by hundreds of thousands of asylum seekers this year.

The news revived a furious row within the European Union on how to handle the flood of refugees. Senior Polish and Slovak officials poured cold water on an EU plan to relocate asylum seekers across the bloc, saying the violence underlined their concerns about taking in Muslim refugees.

Britain announced on Monday it would boost its intelligence agency staff by 15 percent and more than double spending on aviation security to defend against Islamist militants plotting attacks from Syria.

Valls said the French authorities would use every means at their disposal to counter the Islamist threat, adding that mosques harbouring extremists would be shuttered and foreigners expelled if they “held unacceptable views against the republic”.

France is home to some five million Muslims, many descending from Algerian and Moroccan immigrants.

BELGIUM – Brussels in lockdown for second day over attack fear 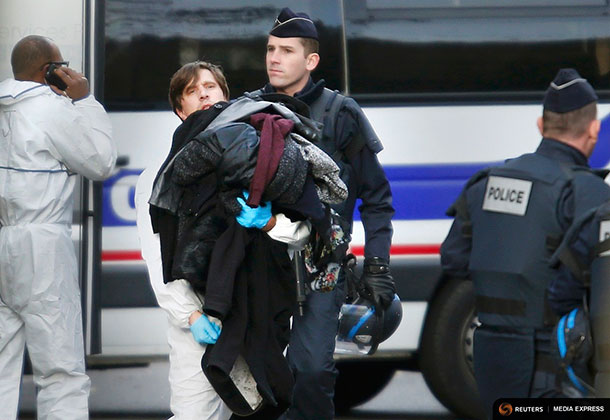 Paris Attack – A Friday Night Not Like Any Other