THUNDER BAY – NEWS – Lakehead University Law Students are hoping to help build relationships with the Thunder Bay Police Service. The goal of the students is to try to create an atmosphere where First Nations students from the north can develop a good relationship with police.

Today from 5:00pm-6:30pm, the Indigenous Law Student Association (ILSA), a student group at the Bora Laskin Faculty of Law, rallied in front of the Balmoral Police Station to what the group said in a media release issued today to “Speak out against unlawful street checks, and inform the community of their legal rights”.

The response from the Thunder Bay Police Service was to keep their distance from the students, and representatives from the Indian Friendship Centre and other First Nation groups. Instead of meeting with the students, police simply videotaped the participants in the rally. That response came after the newspaper and television cameras had left the rally.

ILSA are speaking out in support of eighteen-year-old Cheyanne Moonias, a teenager from Neskantaga First Nation, who recently filed a complaint against the Thunder Bay police after a recent street check that has left the teenager shaken and afraid of police.

Everyone should know their Legal Rights

“Thankfully, Cheyanne knew her rights, and had the courage to stand up to police”, stated first year law student Sherry Abotossaway. “However, the fact remains that racism is still happening in Thunder Bay; people’s rights are being infringed. We are in class reading about the Charter and the right not to be arbitrarily detained in criminal law — and then we hear what the Thunder Bay Police are up to.” 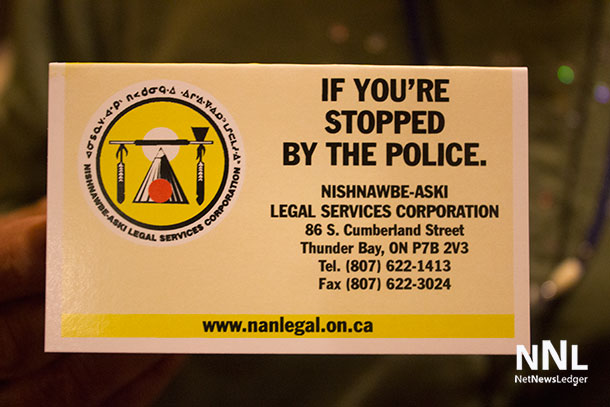 As part of its efforts to bring attention to this issue, ILSA will be promoting a recently invented phone application called “Legalswipe”, that informs its users of their legal rights during an encounter with police. The app was created in response to racially-motivated carding in the Toronto area. ILSA will also distribute paper cards with the same information. 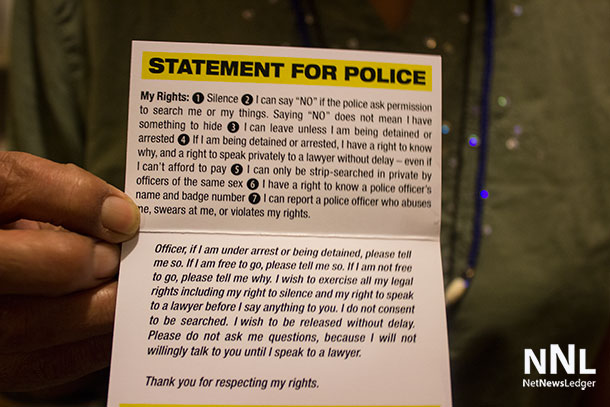 “As we’ve learned at law school, police do not have the right to stop you from where you’re going, to detain you, unless they have reasonable grounds”, said Abotossaway “ILSA’s hope is that, with this rally, Legalswipe, and the paper cards we will distribute, citizens in Thunder Bay, and the Thunder Bay Police will learn what police can and cannot do. Everyone should know their legal rights.”

The law students were really impressed by the number of people showing support, honking the horns on their cars and waving. Several people stopped to join the rally who had simply been driving by.

“Officers will from time to time, have the need to speak with members of the public.  The Thunder Bay Police Service does not arbitrarily stop persons to collect personal information.

“It has been our experience that having the public’s trust and cooperation is paramount to conducting investigations.  We seek to identify persons who we believe have information that may further an investigation.  As the name “Intelligence Based Policing” suggests, public safety and criminal investigations rely on the analysis of good information.  Any contact our officers have with the public can be beneficial and often assists in furthering our ability to serve and protect all members of our community.

“People have the right to fair and bias free treatment by their police service and we respect that.”

Michael Gravelle, MPP for Thunder Bay-Superior North, and Bas Balkissoon, MPP for Scarborough – Rouge River and Parliamentary Assistant to the Minister of Community Safety and Correctional Services, hosted a public consultation on street checks in Thunder Bay to receive input and feedback from Ontarians.

Minister Gravelle stated that the Ontario Government has “Zero Tolerance” for racism, and expectations are that police services across the province must be consistent and respect the rights of all people.

The Ontario Government is examining changes to legislation.