THUNDER BAY – ELECTION 2015 – Andrew Foulds says that the New Democrat message is resonating well at the doors he is canvassing across Thunder Bay Superior North.

Foulds shares that the task of door knocking is hard on the knuckles, and that he has been out on the doors talking to voters a lot.

The campaign has 49 days left, which means there is still lots of time to go. Usually election campaigns can be as short as 35 days.

The longer campaign has bolstered the youthful Foulds, who as taken a leave of absence from Thunder Bay City Council and from his job as a teacher at Superior Collegiate during the campaign. 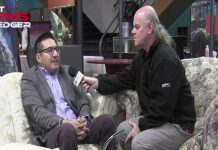