KUALA LUMPUR/BEIJING (Reuters) – Angry relatives of Chinese passengers aboard a Malaysia Airlines plane missing for more than a year clashed with police in Beijing on Friday as French officials extended the search for debris on remote Indian Ocean island beaches.

Investigators on the French-governed island of Reunion have collected a piece of wing that Malaysia has said came from Flight MH370, the first real clue in one of the greatest mysteries in aviation history.

The discovery of the piece of wing, known as a flaperon, on a Reunion beach was the first piece of direct evidence that the plane had crashed into the sea but distraught family members in China said they wanted clearer answers and have accused Malaysia of withholding information.

About 50 family members staged a noisy protest near the Malaysian embassy in Beijing and scuffled briefly with police who stopped them from entering a road leading to the embassy.

Some carried signs that said: “Malaysia hides the truth, Malaysia delays the search”.

One woman whose daughter was on board demanded answers.

“I want to know what on earth happened to MH370. I want the government to provide something reliable, an adequate and convincing argument to convince us because it’s been more than 500 days,” said the woman, who asked not to be identified.

Others pointed to discrepancies in information released by Malaysian and French authorities after the barnacle-covered piece of wing was flown to mainland France for investigation.

Malaysia said on Thursday paint colour and a maintenance seal were matches for MH370, although French authorities have stopped short of declaring a definitive match.

The protesters in Beijing said they had gone to the embassy to seek a meeting with Malaysian officials.

“We request that the Malaysian government give us an explanation for this,” said Cheng Liping, whose husband was on board MH370, referring to the discrepancy.

“No one from the Malaysian government has made an appearance.”

Malaysian Transport Minister Liow Tiong Lai said he understood relatives wanted to know what had happened to their loved ones.

Reunion is about 3,700 km (2,300 miles) west of the primary search area off the southwest coast of Australia and Liow said he would seek expert advice before asking Australia, which is leading the underwater search, to modify its efforts to find where the plane went down.

Investigators believe that someone may have deliberately switched off the aircraft’s transponder, diverted it off course over the Indian Ocean and deliberately crashed into the sea.

France said it was ramping up its search along the coast of Reunion after additional debris, including a plane window and aluminium foil were found. None of the new debris appeared to have come from MH370, a spokesman for Australian Deputy Prime Minister Warren Truss said.

The French decision to devote additional planes, helicopters, patrol boats to the area came as Malaysia appealed to Mauritius and Madagascar, near Reunion, to help widen the search.

An initial search of a 60,000 sq km (23,000 sq miles) patch of sea floor has been extended to another 60,000 sq km but Australia has not been asked to extend its search area, Truss’ spokesman said.

Brian Alexander, a lawyer with U.S. firm Kreindler & Kreindler LLC, which represents 48 families of MH370 passengers from around the world, said the flaperon alone would be unlikely to present enough evidence to inform a legal case about the cause of the crash. 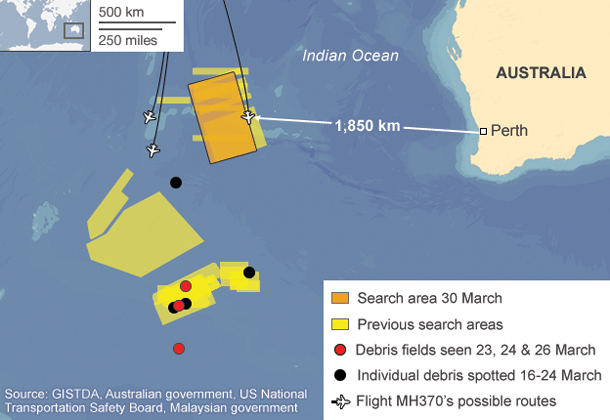