The voters choosing their candidate were voting with a preferential ballot, a process where one vote, rather than repeated ballots would determine the candidate.

The Winner is Don Rusnak. Rusnak was born in Thunder Bay, and is proud of his Ukrainian and Anishinaabe heritage.

Don states that his campaign will focus on the economic and social issues facing the Thunder Bay Rainy River riding.

The hall at The Da Vinci Centre was filled with happy Liberal members, who were there to cast their vote. 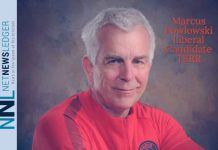