Home Living The Truth about Reconciliation

THUNDER BAY – “The only way to get to the future is to pass through the present. This is the only truth that can guide our reconciliation.”

The purpose of the 94 recommendations emanating from the report of the Truth and Reconciliation (TRC) is to provide pathways and road maps in order “to redress the legacy of residential schools and advance the process of Canadian reconciliation.” Building on the ‘oft neglected Royal Commission on Aboriginal Peoples of a decade ago, the TRC offers a blueprint for action in the fields of language and culture, health and social welfare, education, and justice. The results of such a call to action would do much to alter the prevailing narratives between the descendants of Canada’s First Peoples and our larger Canadian society. But more importantly, fulfilling the recommendations would begin to address the horrid third-world conditions which fill the lives of so many Aboriginal Canadians. Without question these present conditions represent the most damnable of the intergenerational legacies of the soul-sapping residential schools era.

Oddly enough however, and knowing that the “best-before” date or lifespan of any critical issue is about as short as a politician wants to make it, the most important recommendations of the TRC are procedural in nature. They are the recommendations calling upon the parliaments of our country to table and consider annual reports on the progress we are achieving in our efforts at reconciliation and realizing the actions inherent in the recommendations. If our political leaders accept most of these recommendations and fail to act on them, then shame on them. If we as a society do not use the mechanisms recommended in the report to hold our leaders accountable, shame on us – as the old, stale and tired narrative of silo-solitudes will continue into a forlorn future.

We believe it is also incumbent upon Aboriginal leaders at all levels in Canada to ensure that these recommendations remain front and centre in the coming federal election. We have always underestimated and underutilized the power of Aboriginal people at the election polling booths. Maybe not this time!

As heart-wrenching as survivor testimony has been and as hopeful as Justice Sinclair is about a future in Canada, one which reconciles its current image of itself with this terrible past, the real truth about reconciliation can be found in the issues and challenges confronting Aboriginal Canadians in the here and now. One of the most damning and seemingly intractable legacies of the government’s residential school policy of cultural genocide and forceful assimilation has been its intergenerational impact: Many are the children of survivors who parent their own children in the same way they were parented. Neglect and physical and emotional violence are substituted for love and nurturing. That lack is, in turn compensated for with substance abuse and addiction and more violence. But there is a hard and bitter truth to this unhealthy behaviour. To blame this dysfunction on the victim as we seem to do is to absolve the larger community from creating it in the first place. As a society, we planted the seeds, fertilized, tended and cultivated the crop only to find it not to our taste!

For instance, we have written in numerous fora and long argued that a National Inquiry into Missing and Murdered Aboriginal Women is one part of the path forward for all Canadians. The TRC has come to the same conclusion. We have urged our Aboriginal leaders to make this an issue in the forthcoming election. With the recommendations of the TRC it now has a much wider platform from which to communicate this and the other messages so eloquently echoed in the TRC report. Desperately looking for a rug to lift and a wide broom with which to sweep, and trying to avoid up-scaling the issues raised by the TRC prior to the October federal election, the Harper government has stated they will not comment on the TRC recommendations until they have read the full report. We only hope that Justice Sinclair will issue the full report prior to the coming federal election. Such timing could not be better for obvious reasons.

We will not move forward on this issue and the other challenges facing Aboriginal Canadians until we realize that in so many different ways, we are all survivors of this terribly hurtful legacy. The only way to get to the future is to pass through the present. This is the only truth that can guide our reconciliation.

Beverly Sabourin is a proud member of the Pic Mobert First Nation and the recently retired Vice-Provost of Aboriginal Initiatives at Lakehead University. She was instrumental in encouraging the university to include Aboriginal curricula as a mandatory component of all degree programs. Peter Globensky is a former senior policy advisor on Aboriginal Affairs in the Office of the Prime Minister and recently retired as CEO of the Canadian Council of Ministers of the Environment. They invite your comments at basa1@shaw.ca

Reconciliation in Action – How is it working in Thunder Bay 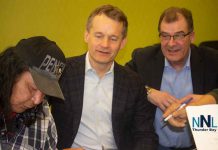 City of Kenora Moves to Reconciliation