The day was filled with fun, drumming, dancing, family and a sharing of the Anishinawbe Culture.

From the drumming to the dancing, to the feast, the day was one that was very easy to enjoy.

With NAD 2015 sharing Father’s Day, there were special noted celebrations to honour the men, and their traditional roles in the culture, as fire keepers and as protectors of the women.

All of the men in attendance were honoured, and were given gifts to remind them of that sacred role in the Anishinaabe culture.

Food is an important part of a Pow Wow. The feast was sponsored by Union Gas. There was delicious moose, whitefish, tasty bannock, wild rice, blueberries, strawberries and corn on the cob.

There was also live music. Jackie Labrador entertained the audience with some great music on stage. 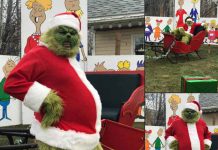