Thought it was time I replied to your many letters that have been showing up in my mailbox more often than two-for-one pizza offers.

(By the way, that’s got to be expensive, sending all those flyers to every home in your riding. Do you have to pay for that out of your own pocket?)

Anyways, Jay, you’ve been such a busy pen pal lately, reporting on how many cheques you’ve dropped off around Nipissing, so I really hate to impose on you. But I was wondering if you would tell those who voted for you – and even those who didn’t – what you think about the report of the Truth and Reconciliation Commission. Maybe you could devote a sentence or two on the subject in one of your almost weekly mail-outs?

It’s kind of a big deal, the TRC. It took about seven years to do its job, and I hear the final report will be over two million pages. Your party leader, Stephen Harper, agreed to spend $60 million to get this report – (did he have to pay for that out of his own pocket?) — to examine all the harm done by Indian residential schools, and how to create respectful relationships with First Peoples.

But the PM is acting like he doesn’t want anything to do with the TRC report. It’s not as if they didn’t find out some important stuff, like that at least 6,000 Indian kids died in the schools out of the 150,000 who attended. Darned good thing schools don’t have mortality rates like that these days, don’t you think?

Mr. Harper didn’t say a word at the big ceremony in Ottawa when the final TRC report was delivered. Does this mean he doesn’t understand it, or does he think it’s what he calls an “aspirational document” like the United Nations Declaration on the Rights of Indigenous Peoples, which he signed but is also ignoring?

Mr. Harper insists he said everything he needs to back on June 11, 2008, when he told the House of Commons he was sorry about residential schools. I saved a clipping of his speech, and – as well as apologizing that the government of Canada was involved in torturing and killing Native children — he said: “ There is no place in Canada for the attitudes that inspired the Indian residential schools system” and that setting up the TRC was “a positive step in forging a new relationship between aboriginal peoples and other Canadians … based on respect for each other….”

Members of the Blood Tribe of Alberta were so impressed with his words that they made him an honourary chief – “Chief Speaker” they called him – and presented him with a traditional headdress. (When they saw pictures of the PM wearing his feather bonnet, some Native people started calling him “Walking Eagle”, but that’s another story.)

Anyways, Jay, when you think about how that “new relationship” promised by Mr. Harper is working out, it seems that things are actually getting a lot worse for Native peoples in Canada.

On my way to a recent pow-wow in downtown North Bay I passed a a convenience store just down the street that was advertising a sale on milk: two litres for $4. Residents of First Nations like Kashechewan are paying $14 for a three-litre bag. People on some reserves – over 100 communities in Canada – need to buy milk and pop because they don’t have water that’s safe to drink. Mr. Harper’s seven-year-old “sorry” doesn’t mean much to people in Iqaluit paying $28 for a head of cabbage.

At the pow-wow they had a “Long Hair Special” dance in honour of Niibin Nakogee. Niibin is only seven, and has been dealing with a lot of bullying at school because he wears a braid or pony-tail, like many Native kids. That sort of garbage has been going on for generations. Sometimes even teachers are involved. What’s Mr. Harper’s “new relationship” doing to put an end to this kind of behaviour?

But the worst thing, Jay, is that your party and Mr. Harper don’t think there needs to be an investigation into why 2,000 Native women have been murdered or gone missing in the past 30 years in Canada. Everywhere I go I run into people whose daughters, sisters or nieces have disappeared off the face of the earth, and who don’t know what happened to them any more than the parents of 6,000 dead residential school students know what happened to their kids. Bet if Rachel Harper was half an hour late getting home from class there’d be Mounties combing every street in Ottawa.

When you ran in the last federal election, Jay, people told me you are a good guy. But, like most First Nations people, I didn’t vote for you because of your boss’s track record on Native issues. He says the right things but doesn’t DO any of them.

Now I’m hoping that all the mail I’ve been getting from you means we’re going to see changes for the better. I might even consider voting for you this fall if you can bring yourself to do me just one little favour.

All I’m asking is that you pick one of the 94 recommendations made by the Truth and Reconciliation Commission that you are willing to support – just one. I’ll be looking for that in your next newsletter.

And if you can bring yourself to do this, Jay, please don’t say it’s just “aspirational”.

Maurice Switzer is a citizen of the Mississaugas of Alderville First Nation. He delivers public education presentations on First Nations history, culture, and contemporary issues. 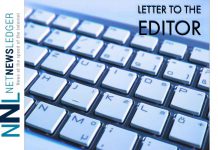