The Fort Frances Lakers stormed out to a five-goal, first period lead, then withstood a massive and furious comeback bid by the Toronto Patriots to pull out a 6-4 victory Friday evening in semifinal action at the Dudley Hewitt Cup Central Canada Jr. A Championship at Ice for Kids Arena.

With the win, the Lakers eliminate the defending DHC champion Patriots from further play with Fort Frances advancing to Saturday’s title game vs. the Soo Thunderbirds (NOJHL) at 7:30 p.m. Central/8:30 p.m. Eastern.

The Fort Frances offensive outburst began eight and a half minutes into the contest with Marco Romano ripping one from the left side high past Toronto starter Mat Robson.

Fort Frances kept coming and added another just over a minute later as Bryson Jasper connected on the power play at 9:37.

Right off the face-off the SIJHL champion Lakers struck again as Nolan Ross finished off a two-on-one just six seconds later making it 3-0.

Dylan Robertson then chased OJHL playoff MVP Robson with the host’s fourth tally of the stanza at 13:08.

On another man advantage, Fort Frances buried another greeting Emanuel Vella as Wyatt Cota connected as he picked up his third point of the period.

The high-powered Patriots would get on the board at 17:21 as Quinn Syrydiuk beat Pierce Dushenko to give Toronto some momentum entering the middle frame.

Building on that Toronto tacked on two more markers starting with defenceman Kody Gagnon, whose superb individual effort was capped off as his stuffed the puck past Dushenko  to finish off a length of the ice rush.

On the power play, the Patriots made it 5-3 at 11:05 as Jeremy Pullara redirected a Jacob Hayhurst feed high over a sprawled Fort Frances netminder.

Toronto pressed the attack at an energetic pace as they looked to notch another before the end of the period, but the Lakers managed to survive the siege and hit the intermission with a two-goal lead.

Showing why they are a two-time defending OJHL Buckland Cup title holder and reigning Dudley Hewitt Cup champs, Toronto mounted more pressure on the Lakers and were rewarded with another tally at 9:22 at Mitch Emerson slid one underneath Dushenko from the slot to bring the Patriots to within one.

However just 18 seconds later, Fort Frances answered right back as Dylan Robertson was sent in alone on a break and made no mistake tucking an insurance marker between the legs of Vella for an all-important insurance tally.

Toronto continued to attack, but could not solve Dushensko and the rest of the Lakers defenders before time expired bringing the near-capacity crowd of 1,289 to their feet giving their hometown side a rousing standing ovation as the contest came to a close.

Final shots on goal were 47-32 in favour of the Patriots with Dushenko picking up the win with a strong 43-save performance.

Vella stopped 23 of 25 in relief and suffered the loss while Robson gave up four against on seven attempts.

Live scoring of the championship game and tournament news and notes can be found on the Dudley-Hewitt Cup website at www.centralcanadianchampionship.com. 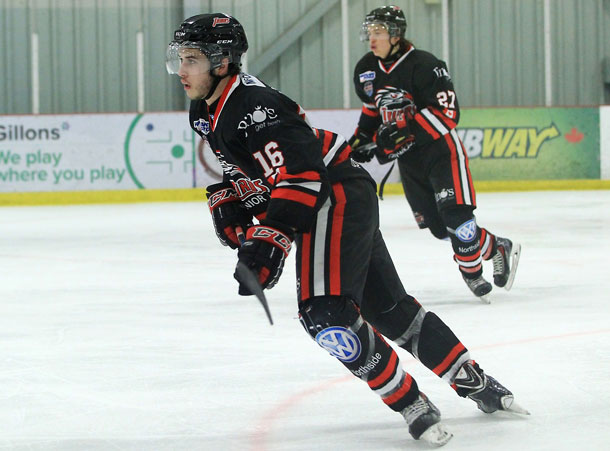