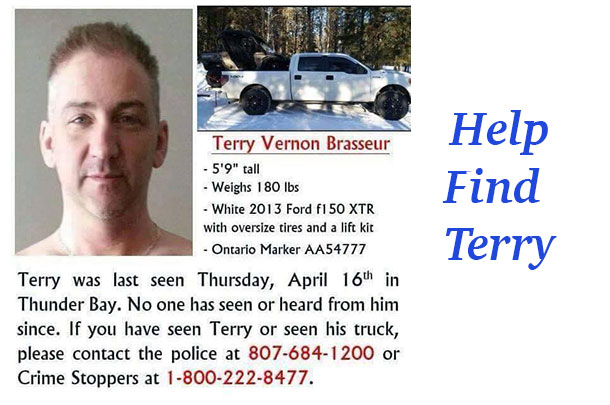 THUNDER BAY – Friends, family and the Thunder Bay Police are appealing for help from the public to locate Terry Vernon Brasseur , 42 who was last seen in Academy Drive area on the evening of Thursday, April 16, 2015

Terry is described as being 5’9″ tall and weighs 180 lb. He has short brown hair and blue eyes. He is believed to be wearing shorts, t-shirt and a ball cap.

He was driving a white 2013 Ford f150 XTR with oversize tires and a lift kit. The vehicle has Ontario Marker AA54777 attached to it.

There has been a Facebook page: Search For Terry Vernon Brasseur (Glisinski).

Police ask the public to please share the article on your social media.