Officers located two male and two female occupants of the residence upon entry.

Police report that a search of the residence resulted in 160 grams of Cocaine, 17 grams of Crack Cocaine and 7 grams of marihuana with a total street value of over $21,000 being seized.

Officers also seized $8745.00 in cash located during the search.

Twenty-eight-year old Swayze Coore of Mississauga, Ontario was arrested and escorted to the Balmoral Police Station. He appeared in court this morning and was remanded to the District Jail on the following charges:

For those who have wondered way Law Enforcement uses an ‘H’ when spelling Marihuana, Thunder Bay Police state, “Marihuana / Marijuana are both acceptable spellings. In the criminal code it is spelled with the “h” so that is what we use.” 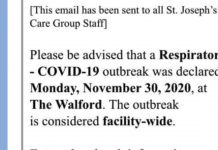 What Would Moving to COVID-19 Orange-Restrict Mean?