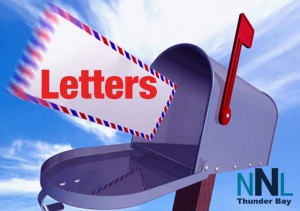 THUNDER BAY – Letters – It is with great interest that I watch the unfolding drama associated with the Events Centre, assuredly coming to a head at this Thursday’s meeting. It is further a shame that I have young children whose bedtime routines don’t accommodate my late evening attendance at public meetings. Rest assured, however, that I will be among the many who will be watching with great interest.

Michael Smith started Monday’s presentation with a reminder that the Thunder Bay Events and Convention Centre discussions began in 2009. There have been numerous hurdles and bumps in the road, and I’m sure the move from Phase 4 to Phase 5 won’t be the end of the struggle.

From an outsider’s perspective, although there hasn’t been a definitive “no” with respect to federal funding, it appears that the federal government has no interest in supporting the project with funding that has not already been allocated to the City.

It’s a shame, really; as the Chairman of Thunder Bay Ventures, a federal economic development agency, I often see the federal government struggling to make its presence known in community and economic development. Indeed, it was painfully obvious in Steve Paikin’s tapings of The Agenda in Thunder Bay a few weeks ago that there was no federal presence on the panel to discuss the Ring of Fire. Perhaps the strategic “war room” of the Conservative Party has written off Thunder Bay as a bastion of left-wing support that would never return the favour of electing a couple of good Conservatives in exchange for a pittance of cash to put forward and Events and Convention Centre.

Regardless of my digression, the real point to be made here is that the Events and Convention Centre is doable. It might not be pretty in the face of some fancy footwork in order to make the project fit a variety of divergent program criteria, but it is a project with merit for a variety of reasons. (As many of you know, I’ve made a career out of doing backflips for project proponents in order to access government funding; I have a much higher than average awareness of the dance that has to be done.)

The case for the Events and Convention Centre cannot be made solely and specifically on its pure economics. While that’s no reason to not have a sound business plan for the facility, I’m going to take a step away from my Chamber of Commerce roots and say that the strategic value of the investment is worth more than that which could ever be quantified on a balance sheet or income statement.

An article from Kingston’s The Whig newspaper makes the case very eloquently:
“All across North America cities are struggling, more often than not unsuccessfully, to protect their economic and cultural vitality as old industries decline and citizens abandon the deteriorating downtown areas for more attractive surroundings. Detroit is perhaps the classic example but it is not alone. More and more Canadian cities now face a similar dilemma.

“Meanwhile, as its economy adapts to the information age, the North American workforce is becoming more specialized, less centralized, more focused on innovation, and increasingly interested in the quality of the life and work environment.

“Many of the world’s most successful corporations, (Apple, Microsoft, and Google are excellent examples) long ago recognized this reality and made massive strategic investments in non-business, quality of life infrastructure to attract and retain the highly skilled and creative workforce essential to their continued economic success.
“Forward thinking cities have also been investing heavily in quality of life infrastructure in an effort to sustain or regain their ability to attract 21 century businesses and industries and the workforce they require.”

It is in the spirit of “quality of life infrastructure” that the Events and Convention Centre should be supported, without question. If we rely solely on economics, we will be disappointed.

I must say, however, that there is one particular element of the financial case for the Events and Convention Centre that I really enjoyed. I noted in my review of the financial projections that, assuming the “lifecycle management” fund isn’t plundered, part of the legacy of the project is that it will effectively pay for its own replacement. Smart move.

Thinking back to the taping of The Agenda with Steve Paikin that I referenced earlier, I recall marveling at how Thunder Bay really has no right to have a Community Auditorium as wonderful as we have. I often find myself thinking that whenever I am fortunate to attend an event there. Could the case for such a facility be made, purely on economics? Absolutely not. Does the infrastructure contribute to our quality of life? Without question. Here with the Events and Convention Centre, you have the opportunity to step in front of the game again and make a lasting impression on our urban fabric by placing a gem at the core of a revitalized waterfront. I fear you won’t get this opportunity again. I hope you share my fear.

This week in Louisville, Kentucky, the American Distilling Institute is holding their annual Craft Spirits Conference and Vendors Expo. Bill Owens, the Executive Director, is a friend of mine. Although our city is home to only one craft distillery – mine – I told Bill that it is my goal to host the Conference and Expo here in Thunder Bay within the next five years. Thunder Bay has rich and deep connections to the brewing and distilling sectors; much of the prized mash bill stock in my industry finds its way here in grain cars, is stored in our elevators, and malted on the floor of Canada Malting. It would be a hell of a coup for Thunder Bay to be the first non-American host for the ADI conference, a well-deserved nod to a city that has supported the spirits business for decades. Of course, there are currently no facilities in our city to host such a Conference and Expo… but there could be!

I wish you all the best in your deliberations, and I really, truly hope you do the right thing and make this project come to life.

Thunder Bay Event Centre Can Not Use Gas Tax for Arena